By Richard Louv
A fascinating book packed with stories about humans connecting with animals with respect and reverence.

"With their parallel lives, animals offer man a companionship different from any offered by human exchange. Different because it is a
companionship offered to the loneliness of man as a species."
— John Berger, About Looking

It is hard to believe that some scientists as well as large numbers of other people persist in the outmoded view that animals don't feel in ways that are similar to human emotions. We can recall times when we've been criticized for honoring animal feelings and have been told that we are just anthropomorphizing animals. Yet many studies point to instances when dolphins, elephants, monkeys, and other beings have been seen expressing joy, grief, and the need to get more attention.

Richard Louv is an exceptionally committed, creative, and energetic author who has 10 books to his credit including the bestseller Last Child in the Woods: Saving Our Children from Nature-Deficit Disorder.That book launched a movement to reconnect children with nature. This time around, Louv focuses on connecting all of us to other animals, both wild and domestic. He begins by encouraging nature psychologists, theologians, trackers, teachers, physicians, and traditional healers to share their animal stories, and he adds some of his own.

"And only then, when I have learned enough,
I will go to watch the animals, and let
something of their composure slowly glide
into my limbs; will see my own existence
deep in their eyes. . . ."
-- Rainer Maria Rilke, "Requiem for a Friend"

In these catastrophic times, Louv finds examples of positive relationships with animals. Many people are offering healing and help by adopting rescue pets. "New Noahs" who are committed to preserving and saving wildlife, are creating habitats where animals can be safe, even in dangerous parts of the world.

Louv also looks at some of the thousands of studies that have shown that "our relationships with other-than-human beings can also have a profoundly positive impact on our health, our spirit, and our sense of inclusiveness in the world." The implications of these findings are far-reaching. Animal companions can help us address loneliness. They provide support services for the sick, the handicapped, the poor, and those barely existing on the edges of society. With great empathy, Richard Louv praises "the mind altering power of deep animal connection." He probes the nature of the animal lover and examines lessons learned about them through brain scans.

Our Wild Calling is a fascinating book, filled with stories that will touch your heart and fill you with wonder. Best of all, Louv shows what can happen when radical respect for animals reigns in the world. 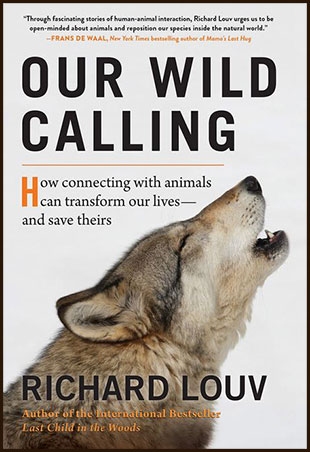