St. Francis of Assisi His Life, Teachings, and Practice

By Jon M. Sweeney
An essential resource on the way of life advanced by the most popular of the Christian saints.

St. Francis of Assisi is the latest title in St. Martin's Essential Wisdom Library, and the publisher has chosen the perfect author for it. Jon M. Sweeney edited a new edition of P. Sabatier's The Road to Assisi: The Essential Biography of Saint Francis; wrote a book about the friendship between Francis and Clare of Assisi, Light in the Dark Ages; and compiled two prayer books, The St. Francis Prayer Book and The St. Clare Prayer Book. For Spirituality & Practice, he created a well-received e-course on The Spirituality of St. Francis, which is now available on-demand.

Sweeney begins this paperback with a chronology and brief recounting of Francis's life, describing him as a religious person of "dramatic gestures and intensely expressed emotions." Francis, he observes, "showed how to shake off, wake up, turn around, and use your body to stir your soul and the souls of those around you."

Sharing his own story of how he came to be inspired by St. Francis, Sweeney touches on aspects of this saint's appeal. He is the most popular of the Catholic saints for many reasons. He revealed that union with God in everyday life is possible for ordinary people. He demonstrated how to live simply and in service to the poor and the sick. He had a naïve dedication to peace in a time of war. From the practice of paying attention to the world around him, he learned to respect and love animals, plants, and even stones. His spiritual quest began with awareness and consciousness:

"Where are you right now? How do you understand yourself in the world? Because where you are and who you are --before God, among other people, with other creatures -- determines what kind of person you will be. What kind of person you will be begins to determine the world in which you live. Francis teaches us to live in reality and to begin to see the One, true Reality."

Some of Francis's key teachings are presented through his prayers, songs, poems, letters, oral teachings, and Rule of Life. Sweeney notes: "Most of Francis's teaching is about acquiring new ways of looking at life that lead to changes in how one lives."

We were especially drawn to the last section on Francis's spiritual practices. These include seeking the vulnerable; blessing animals, stones, fish, sun, and moon; holy foolishness; denial and dance; and finding joy. Giving us another reason to recognize Francis's relevance to our own times, he compares his reverence for the Earth to that of Vietnamese Buddhist teacher Thich Nhat Hanh. "He showed how touching the earth and its creatures with gentleness and care puts us in touch with the holiness around us that we may not fully understand but we can reverence."

Whether you have long admired St. Francis or are just discovering this saint for all times, this book is an essential resource for your spiritual journey. 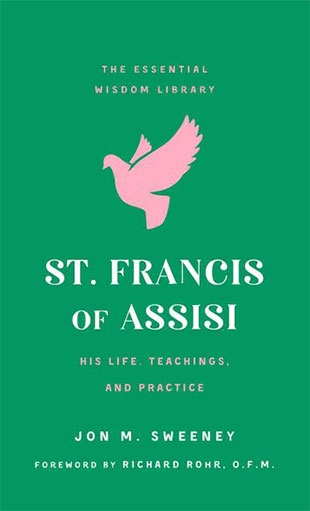