By Jesse Wegman
An overview of the problems with the electoral college and the benefits of a Presidential election based on the popular vote.

Jesse Wegman is a member of The New York Times editorial board, where he has written about the Supreme Court and legal affairs since 2013. Two of the five last presidential elections have resulted in the victory of candidates who were defeated in the popular vote. That's because the voters in each state chose electors who then chose the president, and the allocation of electors to the states does not match the percentage of voters in that state. California, for example, has 1 elector for every 718,000 people, while Nebraska has 1 elector for every 380,000 people.

This unrepresentative system has prompted citizens and politicians to call for the abolishment the Electoral College. Wegman points out what many of us do not know: there have already been more than 700 efforts to abolish or revamp this terrible system.

The author outlines some of the benefits which will accrue once the electoral college is tossed out and the president is chosen by the popular vote. We can expect less voter apathy and an increase in voter turnout. Politicians will be forced to address more issues of concern to voters, and not just concentrate on what is needed in certain states. Best of us, it would restore the people's belief that they live in a democratic society. 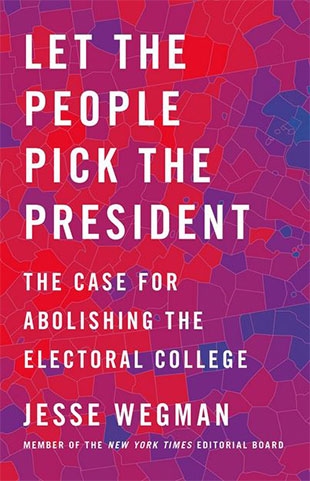