By Jim Forest
Stories from the life of the peace activist and Eastern Orthodox writer.

Jim Forest is an internationally renowned peacemaker and spiritual writer. Among his books are All Is Grace: A Biography of Dorothy Day; Living With Wisdom: A Life of Thomas Merton; Praying With Icons; and Loving Our Enemies: Reflections on The Hardest Commandment. He is profiled in S&P's Living Spiritual Teachers Project.

In the opening page of this memoir, Jim Forest tells us: "I was a 'red diaper baby' — both my parents were members of the Communist Party." Later, the author has kind words for his mother's political ethic: "For her Communism boiled down to doing whatever she could to protect people from being treated like rubbish."

Like mother, like son. Forest has always been committed to compassionately helping others rather than proudly spouting ideology.

When he was 10, he attended his first church service where he was touched by liturgy in ways that would surface later in his life when he converted from Catholicism to the Eastern Orthodox Church.

In 1959, Forest enlisted in the U.S. Navy and was shocked by the Bay of Pigs invasion. His anger at the killing of innocent citizens later caused him to connect with Dorothy Day and the nonviolent resistance movement. He and this spiritual mentor shared a love of worship as a spur to their activism. With another friend, Thomas Merton, Forest shared a commitment to the contemplative life.

In 1964, Forest along with Jim Douglass and Daniel Berrigan founded the Catholic Peace Fellowship which is still going strong. The author pays tribute to these exemplars of the faith who encouraged and inspired him to share with all his vision for a more peaceful and loving world.

In 1968, having been inspired by the witness of Dan and Phil Berrigan and the others in the Catonsville Nine who had burned draft cards, Forest decided to participate in a similar action in Milwaukee. Their group became known as the Milwaukee Fourteen; they burned approximately 10,000 cards with homemade Napalm. Forest spent a year in prison for his participation in this act of civil disobedience. Writing Straight with Crooked Lines concludes with the author's nightmarish battle with kidney failure and treatment with dialysis. In contrast, the author reveals his joy being an Eastern Orthodox believer. 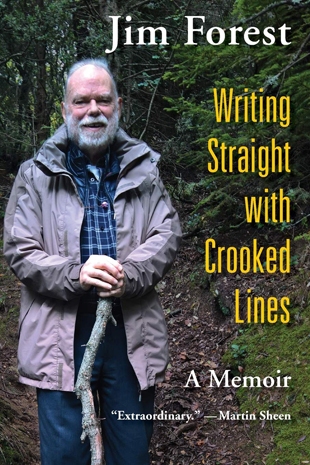