All Is Grace A Biography of Dorothy Day

By Jim Forest
A passionate, detailed, and illuminating biography of the inimitable founder of the Catholic Worker movement.

Jim Forest is secretary of the Orthodox Peace Fellowship and lives in The Netherlands. He is the author of many books including Praying with Icons and The Road to Emmaus. Using recently published diaries and letters along with his own involvement in the Catholic Worker movement, Forest has written a passionate, detailed, and illuminating biography of the inimitable Dorothy Day ((1897-1980).

Even as a high school student, this extraordinary woman had a fascination with city life and the plight of the poor which was fed by the Russian writer Peter Kropotkin. She worked as a journalist and in 1927 became a Catholic and then in 1933 launched with Peter Maurin the radical publication Catholic Worker. This project enabled her to harvest her passion for social justice, to write regularly, and to take care of her daughter from a failed marriage.

Soon a community formed around Day and her mission of taking care of the poor, the hungry, and the homeless. Volunteers appeared to help sell the paper on the streets, picket and protest, and work in the hospitality houses. By 1938, the print run for the paper was 190,000. Over the years, the Catholic Worker was involved with both the civil rights movement and efforts to unionize farm workers. Of course Dorothy Day's pacificism angered many Catholic priests who preached to their congregations in support of the war. She insisted that wartime "does not exempt us from the commandment to love our enemies and do good to those who curse us, for the Gospel never changes."

Day's practice of civil disobedience landed her in jail on many occasions. But she also had plenty to thankful for in the 1960s with the publication of Pope John XXIII's Pacem in Terris, the Second Vatican Council, and U.S. Congress' passage of the Civil Rights Act of 1964 and the Voting Rights Act of 1965. Then the war in Vietnam brought Day's nonviolent activism to life as she led and participated in demonstrations, teach-ins, vigils, picket lines, and other acts of protest.

"We are all called to be saints," Day would say frequently but whenever people spoke of her as a saint, she got uncomfortable. Father Henry Fehren in promoting her as a saint wrote about what impressed him most about her: "Her perseverance — year after year living an austere life in the grimmest of conditions, being jailed again and again, never giving up doing the works of mercy, never getting cynical, never letting her love of God and people dissolve."

Forest goes even further in his praise of Day in "A Personal Remembrance" where he salutes her for finding beauty in strange places, her determination and resiliency, her patience, her love of the Mass, her zeal for justice, and her modeling of compassion, hospitality, and mercy. 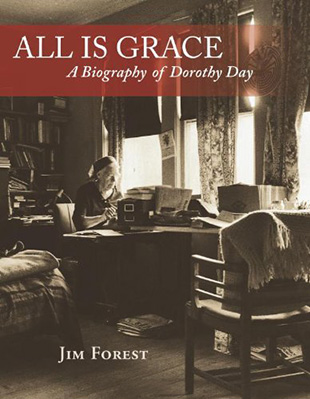