By Jon M. Sweeney
The further endearing adventures of the Pope's cat, this time on Christmas Eve.

Imagine spending Christmas Eve in Rome with Pope Francis! To us, this sounds like a miracle come true, but to Margaret, the Pope's cat, it starts off annoyingly, as she's awakened by the beeping of trucks and the clanging of chairs down in St. Peter's Square.

Once fully awakened, this creature — endearingly depicted by visual artist Roy DeLeon, an Oblate of St. Benedict with a feel for the holy ground on which Margaret walks — is happy to be tucked into the Pope's robes and ushered away from the discordant noise to hear the harmonies of a Swedish children's choir. She sets them all giggling as she ducks her head in and out, unsure whether she's supposed to come out to play. The Pope encourages the laughter, reminding everyone present that it's good for the soul.

But it's when the Pope and Margaret go to "say hello to St. Peter" that this beloved cat's adventures really begin. The Pope has to leave to attend business and entrusts her to a cardinal. But when the cardinal stops to talk with someone, Margaret winds up lost in the middle of the world's largest cathedral. How will she ever find the Pope again and get home? (At the risk of a spoiler, let us mention that she is comforted by being close to Mother Mary in Michelangelo's Pietà sculpture.)

Those who have read other Margaret books like The Pope's Cat and Margaret's First Holy Week will not be disappointed by the turns of events in this Christmas volume. Like the others, it is at once reverent, funny, and tender. Written for six to ten year olds, it will appeal to anyone who ever wished they could get closer to holy places and holy people ... which we suspect includes just about everyone reading this review. 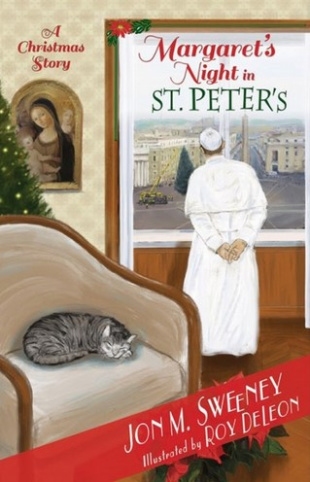