Eye of the Heart A Spiritual Journey into the Imaginal Realm

By Cynthia Bourgeault
A masterful presentation of a map of the cosmos with a focus on the energy exchanges between the visible and invisible worlds.

Cynthia Bourgeault has created an e-course in which she introduces the teachings from this book and positions them for Lent and for us as we live through a global pandemic. Spiritual Gifts from the Imaginal Realm will run from February 18 - April 1, 2021. Included are 13 emailed lessons, access to an online Practice Circle open 24/7, and two one-hour Zoom sessions with Cynthia.

Cynthia Bourgeault is a modern-day mystic, Episcopal priest, theologian, and the founding director of an international network of Wisdom Schools. Profiled in Spirituality & Practice's Living Spiritual Teachers Project, she has created many e-courses for S&P, including explorations of the teachings of G. I. Gurdjieff and Teilhard de Chardin.

Bourgeault describes this book as "one part spiritual memoir, two parts exegesis, and one part extended prose poem." She leaps off with an account of a deep but short-lived love affair with a man she calls "the Greek" and her "watery Shams Tabrizi" (Rumi's spiritual companion who catalyzed his transformation). She and the Greek were happily sailing his catamaran in the Caribbean when things began to go wrong -- accidents like the radar washing overboard, a fractured ankle, and food poisoning, that finally escalated to a "devastating wreckage of our hearts and our dreams." Although admitting she still does not know why all this happened, Bourgeault shares that she has come to ask different questions. Revisiting the experience at the end of the book, she recalls a moment when she cried out to the cosmos: "Why was this taken away?" and heard, in the voice of her long-time teacher Rafe, "Wrong question. The real question is 'Why was it given.' "

Another appropriate question would be "From where was this given?" Because the origins of such gifts is the main subject of this book. Bourgeault sets out to provide a map of the cosmological realms in the "Chain of Being" described by the ancient wisdom schools. She pays the most attention to the Imaginal Realm (World 24) and the Visible World/Earth (World 48) and the energy and assistance that is exchanged at the junction point between these worlds, the invisible and the visible.

Throughout Bourgeault references the perspectives of Gurdjieff, Teilhard, esotericist Valentin Tomberg, Christian theologian Walter Wink, wise woman Helen Luke, and others. To their terminology, she adds modern day language that often makes an idea much more accessible. For example, describing the causal laws that operate in each realm, she notes that these are not like rules but rather are "more like algorithms governing the conventions by which each realm is constructed." In the imaginal realm, this algorithm includes "synchronous causality, radial time, nonduality, fluid and permeable boundaries, nonlocalized action, a holographic sense of selfhood (the whole in the part and the part in the whole), conscience as the core behavioral motivator, and a capacity to move against the flow of entropy and actually generate energy rather than merely dissipate it." Needless to say, Bourgeault, always an ambitious scholar and writer, sets out to explain how these principles play out and how imaginal causality can be recognized.

Spiritual practices play a role here, too: conscious labor, intentional suffering, cosmic service, lectio divina, and tonglen (as a form of cosmic dialysis). In a chapter on imaginal purification, she talks about what the Sufis call "polishing the mirror" or "cleansing the lens of perception" in order to be better able to see with the eye of the heart. Here she calls for a "new operating system" (more modern language) of perception centered in the heart.

In the final sections of the book, Bourgeault discusses the reality and impact of the "conscious circle" of beings on both sides of the visible and invisible divide engaging in imaginal interchange -- with wisdom, blessings, protection, and an occasional "course correction" flowing between them. Choosing again to use contemporary lingo, she calls this a "bodhisattva bandwidth." The conscious circle consists of others beyond venerated saints; it also includes wisdom schools and communities of servants helping to purify the world of toxins and reading the signs of the times. Just contemplate the implications of this!

Although I found it tough going at times, while reading Eye of the Heart I kept feeling thankful for what I was being given (yes, another gift). A complex, surprising, and divine milieu like our own can't be boiled down to a simple formula. And whereas it is tempting to think that one realm must be better than another, Bourgault does not succumb to that temptation. Quoting a Hadith Qudsi (a saying of the Prophet Muhammed attributed to God), "I was a hidden treasure and I longed to be known, so I created the worlds visible and invisible," she offers us a new and to me a profoundly moving image of the cosmos:

"Each world along the Great Chain of Being is not merely the next step in a mathematical progression; it is a specific set of conditions that allows for the expression of some very specific aspect of the divine heart. And in fact, the word cosmos in the original Greek actually means 'ornament.' If rather than seeing these words as beads on a chain we see them as balls on a Christmas tree, we might better understand how each of these precious cosmoses is beautifully and uniquely artificed to bring forth some specific aspect of the divine longing to be known. The chain links drop out, and you stand like a small child on Christmas Eve, bedazzled by the wonder of it all." 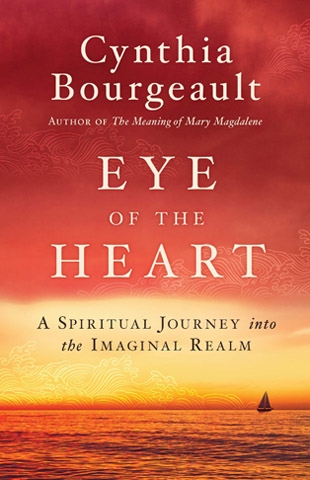