Learning to Pray A Guide for Everyone

By James Martin
Practical advice for people of all traditions who desire to connect with God.

Jon Sweeney interviewed James Martin live on Spirituality & Practice's Facebook page on April 14. You can watch the recording of the interview on S&P's YouTube channel: https://www.youtube.com/watch?v=5_wP3NG52sg

I can’t tell you how many books on prayer I’ve perused in the last thirty years. Hundreds, perhaps a thousand. Spirituality & Practice, too, sees several dozen new books on prayer each year.

Prayer is such a common topic because it is so fundamental. It is, for many people and many spiritual paths, the first and foremost human response to spiritual need, desire, and yearning for something more.

Father James Martin, a Jesuit and best-selling author, is probably the most recognized Catholic priest in the United States. For twenty years now, he's been a frequent guest on television programs and in the media talking about his books, commenting on faith matters, and discussing problems in the Catholic Church. He’s articulate, funny, friendly, well-connected, and popular with readers because he uses ordinary language, never talking down to us. He is profiled in our Living Spiritual Teachers Project.

Learning to Pray is one of his best books. It quickly moves beyond the sort of prayer that consists of Hail Marys in times of desperation, lists of needs one wants satisfied, and the repetition of phrases that some of us carry from childhood to the grave. This is a book about prayer that aims to be a real tool in people’s lives. Martin is a Catholic, and his prayer experience and anecdotes often involve Jesus, but his advice is also unmoored from his tradition in that it may be applied by people of other traditions — and easily, too.

He says very clearly that there are no wrong ways to pray. What’s “wrong” is to stop praying, or decide that prayer is not for you, because someone has led you to misunderstand what prayer is about.

And, as is the case in most of Martin’s books, this one is full of personal stories and humor. For instance, here is one way Martin explains that just because prayer is meant to be a natural and easy conversation with God, doesn’t mean it should always lack formality:

"In my daily prayer, I occasionally catch myself being, for want of a better word, too informal. That doesn’t mean that you always need to pray in an overly formal or obsequious way, as the Anglican school chaplain does in a trenchant scene from the Monty Python film The Meaning of Life. Dressed in a black cassock and snowy white surplice, he stands in a chapel, in front of the assembled students, and leads them in this marvelously groveling prayer:

" 'O Lord, oooh, you are so big, so absolutely huge. Gosh, we’re all really impressed down here, I can tell you. Forgive us, O Lord, for this, our dreadful toadying. But you’re so strong, and, well, just so . . . super.'

"Then he leads them in a tuneful hymn that begins, 'O Lord, please don’t burn us.' "

The advice here is practical and aimed at the reader (or listener — the audiobook from Harper Audio and available on Audible is also well done and read by the author) who desires simply to connect with God. Learning to Pray may just as well have been titled “Learning to Connect with the Divine,” since Martin’s approach to prayer is a most basic, imaginative, and reflexive means of approaching the Divine-human relationship. For example, he compares prayer to friendship, describing the means of praying and what happens when you pray to how we might get to know a friend as the relationship grows and deepens.

I found particularly helpful chapter 17 that deals with how to handle distractions in prayer. Martin is down to earth in his explanation of the problem and its solution. Distractions that are about unmeaningful things, such as wondering what’s for dinner, can be “let go” like noticing “clouds floating by.” However — and central to the Ignatian Spirituality that forms Martin — there are also meaningful distractions that God may be placing in your path when you pray. He calls this, “When a distraction is not a distraction.” Then, whatever feels to be distracting your attention may in fact be central to prayer, and you should pause to consider it: “God may be bringing up a particular issue, so that you can attend to it.”

Then, it is helpful to return to chapter 12 on “The Gift of Imagination” which is at the heart of this Jesuit author’s Ignatian spiritual practice, and which he explains to the rest of us here, as he did in an earlier bestseller, The Jesuit Guide to (Almost) Everything.

Learning to Pray has been out for several weeks now, and Martin has been busy teaching from it in public forums. I'll be interviewing James Martin live on Spirituality & Practice's Facebook page on April 14 from 9:00 - 9:30 PT / 12noon to 12:30 ET. Join us!

To whet your appetite for my discussion with Martin, here are some short videos on YouTube that will aid your use of the book. Each is about three minutes in length:

“What happens when you pray?”

“Why you should pray”

“How can I deal with distractions in prayer?” 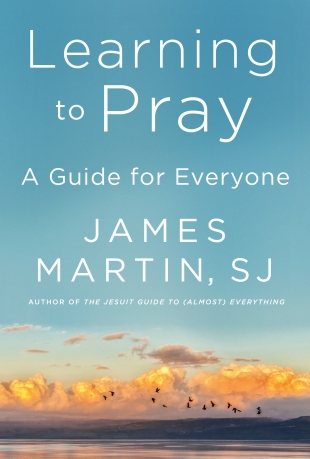