Rev. James Martin, SJ, is a Jesuit priest, editor at large of America: A Jesuit Review, and bestselling author. He was born in Plymouth Meeting, Pennsylvania, and graduated from the Wharton School of Business in 1982, where he received his bachelor’s degree in economics with a concentration in finance. After working for six years in corporate finance with General Electric in New York City and Stamford, Connecticut, he entered the Society of Jesus (the Jesuits) in 1988.

From 1992 - 1994, when he was in his early thirties, Martin worked with refugees in Nairobi, Kenya, as part of his Jesuit training. He quotes Carlos Valles: "If you always imagine God in the same way, no matter how true and beautiful it may be, you will not be able to receive the gift of the new ways he has ready for you." He writes that the Africans "transformed my heart in ways I couldn't have imagined."

Martin has written for many publications, including The New York Times and The Wall Street Journal, and he is a regular commentator in the national and international media. He has appeared on all the major radio and television networks, as well as in venues ranging from NPR’s Fresh Air, FOX’s The O’Reilly Factor, and PBS’s NewsHour to Comedy Central’s The Colbert Report. He is consultor to the Vatican's Secretariat for Communication​. 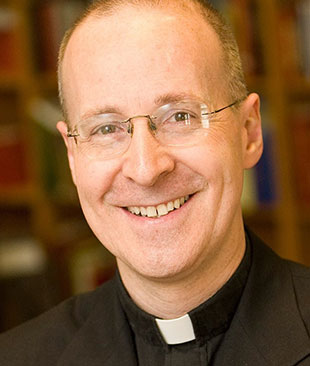