By David Chadwick (editor), Shunryu Suzuki
Profound teachings on being present from the influential Zen master.

This is a collection of anecdotes and short teachings of the Zen master Shunryu Suzuki, author of one of the most influential spiritual books of the twentieth century, Zen Mind, Beginner’s Mind. It is compiled by David Chadwick, a student of Suzuki’s since the 1960s, who also wrote his biography (Crooked Cucumber: The Life and Teaching of Shunryu Suzuki) in 2000.

An earlier collection of similar short teachings, To Shine One Corner of the World, appeared in 2001. We liked it so much that we gave it one of our annual book awards that year. That collection has now been republished by Shambhala Publications under a new title: Zen Is Right Here.

Zen Is Right Now is perhaps even better. Most of these teachings are from memories of Chadwick and other students of the former Roshi at Tassajara Zen Mountain Center, the first Japanese Buddhist Sōtō Zen monastery in the West, which Suzuki founded near Carmel-by-the-Sea, California in 1967. For example:

“I asked Suzuki Roshi, ‘When I work in the kitchen, I feel like I’m in the heart of practice. Why do I have to sit so much?’ He answered, ‘To open your mind wider and wider.’ ”

“A student said she did not understand the meaning of her life. Suzuki answered, ‘Eternal meaning is in your everyday life. So there is no need to figure out what is the meaning of life.’”

“What zazen [Zen meditation practice] is has been explained in many different ways. One day Suzuki Roshi put it very simply: ‘It’s just to be ourselves.’ ”

This teaching on Being Present is one of our favorites:

“When we first moved into the City Center, the neighborhood was pretty wild. Not long after the move, a student was sweeping the front steps. A teenage girl across the street had put her radio in the second-floor window, pointed out and blasting. She was boogying and hollering out the window to the rhythm of the music. Suzuki Roshi was in the front hall and stepped outside to see what was happening. I was just walking up the steps. The student with the broom shook his head and said to Suzuki Roshi that he couldn’t see how to fit this into his practice. Suzuki laughed and roared up at the girl somewhat with the beat, spun around on his heels, and went back into the building.” 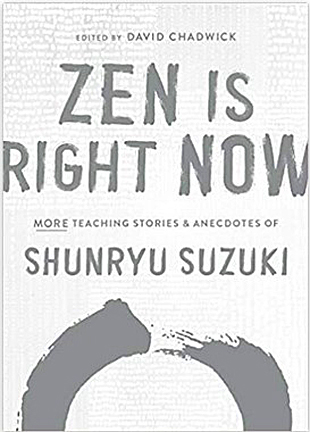 To Shine One Corner of the World