A Journey with Jonah The Spirituality of Bewilderment

By Paul Murray
Lessons from the story of Jonah and the Whale about recognizing grace in unexpected places.

Paul Murray, a Dominican priest and professor from Northern Ireland, writes on big subjects with brevity. Among his other books is a beautiful one on Mother Teresa’s mysticism, I Loved Jesus in the Night.

Originally published in Ireland in 2002, A Journey with Jonah has now been republished. Its three chapters and three “lessons” relate to a storm, a whale, and a plant, familiar to anyone who has read the short biblical Book of Jonah. In quick summary: Told by God to go to Nineveh, Jonah — who's bigoted and thinks badly of the Ninevites — flees in the opposite direction on a boat. He goes down into the hull of the boat and falls asleep. A frightening storm arises and the boat’s crew members become upset, throwing Jonah overboard where he’s quickly swallowed up by a whale. Three days later, the whale spits him up and Jonah sits in self-pity under a large plant, which is then attacked by a worm and dies. Finally, Jonah does as he was told: He goes to Nineveh to preach.

This rather silly man, Jonah, is called a prophet by Jews, Christians, and Muslims. Why? Paul Murray looks for answers in the text and its commentaries over the centuries. Murray engages with sources from all three traditions. We found his perspective in chapter 3, “Compassion without Limit: The Lesson of the Wondrous Plant,” most helpful:

“Reading through the book of Jonah, we soon come to realize that God speaks to us not only through his word but also through our own confused emotions. Jonah’s relationship with God, at least to some significant degree, consists of a series of different states of feeling, all of which have been provoked by different circumstances: emotions of guilt, fear, joy, etc.”

(See the excerpt accompanying this review as well.)

With the aid of Carmelite spirituality, including the teachings of Saint Teresa of Avila and St. John of the Cross, Murray then explains that being close to God does not always mean feeling spiritual or happy. He calls this a “Jonah truth,” that God speaks to us sometimes when we’re not feeling “on some exalted spiritual sphere” but rather, in the midst of our emotional and passionate ordinary troubles. Through a kind of “grace and mystery of bewilderment” like Jonah’s, Murray says, we can begin to recognize God in places where we wouldn’t have recognized God before.

The book then concludes with a short, supporting teaching on Jonah from Joseph Ratzinger — written when he was a cardinal in the Roman Catholic Church and published here for the first time — and a complete translation in English of the Book of Jonah, using the New Revised Standard Version: Catholic Edition. 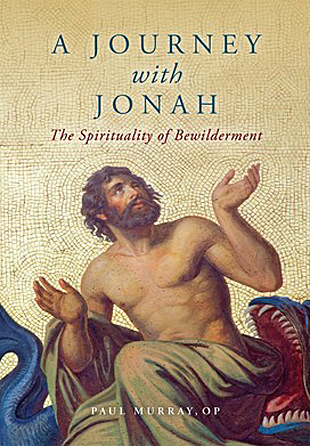