Sacred Earth, Sacred Soul Celtic Wisdom for Reawakening to What Our Souls Know and Healing the World

By John Philip Newell
An offering of Celtic spirituality and intuition to heal our communities and world.

We have been following the work of John Philip Newell for years. He’s the former Warden of Iona Abbey in the Western Isles of Scotland and founder of The School of Earth and Soul. You can learn more about him in his Living Spiritual Teachers profile.

Sacred Earth, Sacred Soul may be his most important book yet. Newell is not simply introducing an ancient spiritual path but also showing its relevance to this time in our lives and this moment in history. The opening pages reveal this, as he discusses the #MeToo and Black Lives Matter movements, the climate crisis that envelopes us, and the abuse of those who are of another nation, or race, or sexual orientation. He says that in every instance sacredness is being forgotten, and recovery of what is sacred is what is at stake.

Somewhere deep down, Newell writes, we know what is sacred and how to protect it. “The Celtic spiritual tradition is one that has long emphasized an awareness of the sacred essence of all things.” But, “The problem is that we keep going back to sleep.”

Newell realizes how appropriate Celtic spirituality is for this era when most of the other Western traditions are waning, groaning from an emphasis on doctrine and beliefs. The Celtic path, in contrast, “at its core is the conviction that we essentially need to keep listening to what our soul already knows.” He goes on to show how a Celtic way of seeing and being can be accessed by anyone.

History of the Celts and Celtic civilization follows. Celtic peoples were spread all over Europe — not only in the northwest part of Europe, which we often assume — throughout the time of what was also the Roman Empire. In fact, the Romans and their temple worship had trouble contemplating Celtic ways 2,000 years ago. Why do they inhabit forests and mountains, rather than create for their gods temples of gold?

In each of the chapters, Celtic teachers are shown to have often been at odds with their co-religionists in Western traditions in ways that reveal them now to have been prophets, ahead of their time. The Catholic Jesuit priest and scientist, Pierre Teilhard de Chardin, for instance:

“But little did the Vatican know what the East would do to this Gallic prophet of earth’s sacredness. In China he began to speak not only about the sacredness of matter, but also the sacredness of the feminine. The 'fragrance' of the feminine, as he called it, or 'the world’s attractive power,' is that dimension deep within us and deep within the matter of the universe that invites union.”

But history doesn’t dominate Newell’s book. Spiritual teaching and practices, do. Over nine chapters, he invites the reader to enter the Celtic way through the Sacred Soul; Sacred Feminine; Sacred Flow; Sacred Song; Sacred Imagination; Sacred Earth; Sacred Matter; Sacred Compassion; and Sacred Journey. Each chapter introduces an important Celtic wisdom practitioner and these range from St. Brigid of Kildare in the early sixth century to the contemporary poet and writer Kenneth White, born in Scotland in 1936.

Spiritual practice, including words of awareness and a prayer of awareness, concludes each chapter. We include two of these in full in the excerpt accompanying this review. 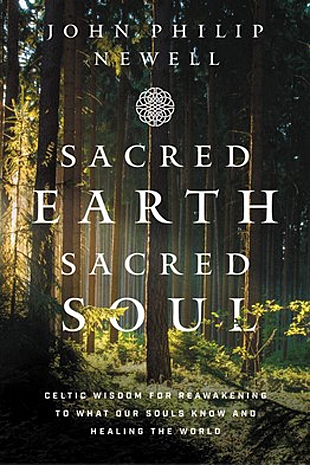