By Harry Freedman
A deep look at the motivations behind the poet, novelist, and singer-songwriter who revealed his soul to the world for six decades.

It isn’t often that a scholar of mysticism turns to writing about a popular artist. In this case, author Harry Freedman, an expert on Jewish and Aramaic sources and author of previous books on the Talmud and Kabbalah, turns to look closely at the life and music of the enigmatic Leonard Cohen.

The Canadian recording artist, Cohen, has long been a favorite of ours. A search using his name on our site pulls up four pages of excerpts, prayers, reviews, and music features.

Cohen’s pilgrimage carried him from Jewish Montreal to a Buddhist monastery and then back again and again. He chronicled much of this in his lyrics, which have often been compared to Bob Dylan’s for their probing of meaning in life.

As Freedman notes early on, “Cohen’s knowledge of the Bible and religious folklore was profound: nearly everything he wrote contains something that touches on a religious idea, even if the song is in no way religious.” His mother’s family was from Lithuania, where her father had been a rabbi. And Leonard’s great-grandfather Lazarus left Poland, where he too was a rabbi, in 1869 for Ontario, Canada. The name “Cohen” usually signifies a rabbinic lineage.

Leonard attended Hebrew school, learning the language of Judaism as well as Torah, Midrash, and Talmud. However, this steeping in the religious tradition and identity of his family “hit rock bottom,” as Freedman puts it, in 1963 when Cohen gave a speech at Montreal’s Jewish Public Library and said, “I believe that the God worshiped in our synagogues is a hideous distortion of a supreme idea — and deserves to be attacked and destroyed.”

Cohen would continue to speak about Judaism but “only through the lens of Kabbalah,” as Freedman says. He was interested most of all in the Jewish idea of “the repair of God,” which are Cohen’s words for an essential kabbalistic teaching. Freedman’s knowledge of these sources is excellent. (See the excerpt accompanying this review for one extended passage.)

Leonard Cohen’s father died when he was just nine years old. He first began seeing photographs of Jews being mass murdered in Nazi concentration camps when he was 11. Freedman explains: “His song ‘Dance Me to the End of Love’ has a line about burning violins. He told the audience at a concert in Cologne in 1988 that the song arose from a photograph he had seen, of people in striped concentration camp uniforms being forced to play violins as victims were herded into gas chambers.”

Then there are Cohen’s Christian and Zen Buddhist influences, which are many and varied. For example, the four gospels of the New Testament appear in his songs, as do scenes of Jesus crucified and being baptized and the Spirit of God as a dove descending to earth and alighting on Jesus.

In the last quarter of his life, beginning in 1994, Cohen was resident at the Mt. Baldy Zen Center near Los Angeles, learning from Zen master Joshu Sasaki Roshi; he was ordained a Zen monk in 1996. The Zen in Cohen’s art is the silence and the ready willingness to question everything, as the questions themselves may lead to enlightenment.

This is not all. For example, Freedman also chronicles Cohen’s sources, through anecdote and reference to his songs, in the medieval Persian Islamic poet, Jalal-ud-din Rumi, in whom Cohen found solace in much of his grief. One of many Cohen songs inspired by Rumi is “The Guests.”

And any book about Leonard Cohen’s art — which is poetry as well as songwriting and performing — would have to include some discussion of love, eros, and sex. “Sex didn’t have to be religious,” Freedman writes, “but it can be. Coition is the first thing to be mandated by the Bible.” Freedman then traces many kabbalistic sources stressing “the mystical essentiality of sex,” and the influence of these on Cohen’s art.

Citing Leonard Cohen’s most famous song, Freedman writes: “Of all Cohen’s sexual imagery the line that best illustrates his belief in sex as a divine activity occurs, appropriately, in 'Hallelujah’: 'I remember when I moved in you, and the Holy Dove she was moving too.' ”

This is a stimulating book. 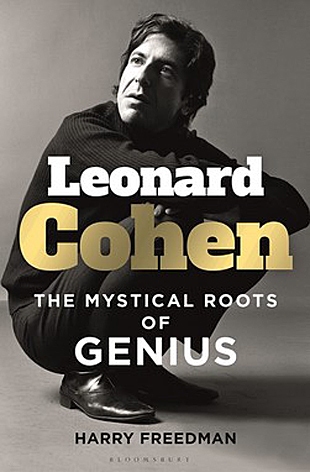 From This Broken Hill I Sing to You