Show Up A Motivational Message for Muslim Women

By Na’ima B. Robert
A self-help spiritual and inspirational guide for women on the Muslim path.

The author of this new book is a convert to Islam, a former CEO, and founding editor of a U.K. magazine designed for Muslim woman called Sisters. She writes motivationally for women of faith who are going through times of despair or who lack confidence to go deeper into their tradition and into their own lives.

It is a thin book with a great deal behind it. The author’s own story is woven throughout. In addition to the achievements already mentioned, she is a widow and mother of five. She has had her share of challenges and life experiences. According to Wikipedia, she turned 44 years old this year.

To what does the title refer? Robert writes: “I define ‘Showing Up’ as an action and an attitude. It is to become the hero of your life story.” She then explains more of what she means:

“So many of us will live mediocre lives, struggling to find our sense of purpose, struggling to achieve anything significant, struggling to make any sort of impact. A major reason for this is that the average person prefers ease to hard work, prefers to make excuses rather than take responsibility, and prefers to play the victim rather than assume the mantle of the hero.”

Her advice comes from knowing the pitfalls of doing religious things while perhaps having forgotten the spiritual meaning behind them. From her Sunni Islam background, she advises:

“What do I mean by ‘sleepwalking’? This is when we live out our days stuck in a seemingly endless routine, going through the motions, with no clear goals or ambitions to aim higher or achieve better or experience more…. How many of us will live out our days in a state of numbness and detachment, never fully engaging in the activities and relationships around us, keeping up a façade that tells the world that we are fine?”

Then she turns to Muslim teaching, and says, “Yes, I know that Allah’s Qadr determines our fate.” Al-Qadr is the Sunni concept of predestination. Robert goes on: “We should not ask ‘what if?’ But I ask you this: Do you know what Allah (swt) has written for you? Have you been shown your future?... Do you have any reason not to believe that He has decreed abundance, happiness and contentment for you? Do you?”

There are also many quotations from the Qur’an, including this one: “Allah (swt) tells us that He will not change the condition of a people until they change what is within themselves” (Qur’an 13:11). Which Robert then follows with: “If we want to see change, if we want to see progress, if we want things to get better, we have to make moves. We have to take action, then anticipate Allah’s mercy with faith, hope and optimism.”

Other quotations from hadith and the Qur’an such as “And admit me by Your mercy into (the ranks of) Your righteous servants” (Qur’an 27:19), are followed by quotations from popular non-Muslim speakers and writers such as Lisa Nichols and Brene Brown.

The author points to many men, women, and children from the books of Sirah who “showed up” in life, with purpose, despite extreme challenges, and she tells stories from the life of the Prophet Muhammad (pbuh) about the same.

This is a book designed for Muslim women — for example, at one point, the author assumes “Every day, you play a multitude of roles: Worshipper, Woman, Wife, Mother, Daughter, Friend, Boss, Leader” — but we suspect that people of other faiths and gender will benefit as well. 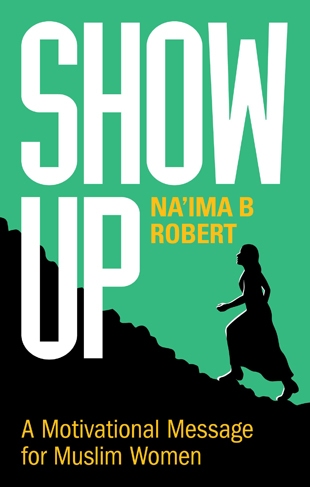