Work A Deep History, from the Stone Age to the Age of Robots

By James Suzman
Revisiting work habits and values in light of cultural changes over millennia.

James Suzman draws upon anthropology, archaeology, evolutionary biology, and economics to argue his case in this thick, vital book on work, the economy, and our future on this planet. A trained archaeologist based in Cambridge, England, he narratively charts the evolution of work among humankind from its simple origins to its complex and troublesome present.

His thesis is that, while some people have come to find more joy in work in recent centuries, most are working many more hours a week than our ancestors ever did, in order to acquire things that don’t really bring happiness and security. Also, our culture of work is outdated, having its origins in the agricultural economy which no longer really guides or fashions our lives.

As one example of how things have changed over time, consider this description of what life was like in northern Asia and Europe about 15,000 years ago: “During the depths of winter, the pace of life and work will have fallen into step with the more glacial tempo of the season. Besides occasional hunting, or expeditions to refresh stocks of firewood, many hours would have been spent huddled close to the fire. Busy minds would entertain and be distracted by stories, ceremonies, songs, and shamanic journeys. Agile fingers would have found purpose in developing and mastering new skills.”

Suzman profiles major influencers around the ideas of economy and work. For instance, he says that the eighteenth century’s economist Adam Smith’s book, the Wealth of Nations, has “a biblical quality to it, not least because Smith had a particular genius for presenting complex ideas in the form of neat parables similar in structure to those that were issued from church pulpits across the land every Sunday.” From Smith came the ideas of the “division of labor,” later essential to industrialization in factories and assembly plants.

He includes chapters on “Time Is Money,” and “The First Machines,” and “The Bright Lights” — because the invention of electricity and other technologies and developments made it possible to work much longer hours and led people to concentrate more and more in cities. A later chapter offers more examples of this: “Sugar fueled the bodies of many workers during Britain’s Industrial Revolution. But its factories, barges, railways, and ships were powered by coal.”

One of the things the chapter “The Malady of Infinite Aspiration” describes is what in spiritual terms might be called The Desire for More and More (that we probably don’t need). It introduces economist John Maynard Keynes and explains his writing on the “relative needs” of humans in modern society: “These needs, he believed, truly were infinite, because as soon as we met any of them they would be quickly replaced by another probably more ambitious one.”

Throughout the book are black and white illustrations drawn from a variety of sources. They picture ancient work tools such as hand-axes and sickles; give timelines of dates of major animal domestications in history and changes in average weekly working hours in the United Kingdom, the United States, and France in the modern era; and show the change in relative human brain size over history.

Suzman wants us to consider our values. Why is “economic growth” deemed essential? It shouldn’t be. He also wants us to acknowledge the troublesome nature of our automated present and future, to remember the value we once placed on the sustainability of our communities as well as our environment, and to change how, where, and why we work accordingly. 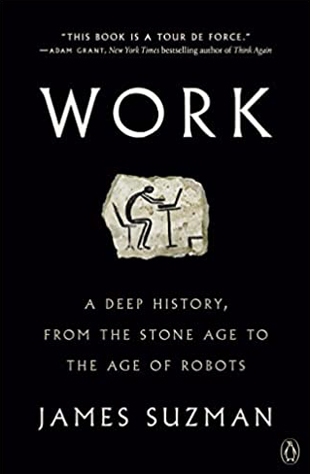