How to Love Animals In a Human-Shaped World

By Henry Mance
Stories of first-hand experiences which supply reasons to radically change the way we treat animals.

"We consider ourselves animal-lovers. We soak up wildlife documentaries and heart-warming stories of animal achievement. We warm to politicians who cuddle animals; their pets would be re-elected
more easily than they would," writes Henry Mace, the chief features writer for the Financial Times, in this hard-hitting examination of the cruel, violent, and disgusting treatment of animals in our times.

Everywhere we look, whether in Western or Eastern countries, our attitudes toward and actions regarding animals reveal a lack of reverence for the seven to eight million types of animals who inhabit the Earth with us. Humans are one species out of 500 or so primates, yet this is very much a human planet. Consider a few examples from the book:

After a summary of these and other statistics, Mance notes: "Given the choice of any time, would an animal choose to be born now? I don't think so."

Fulfilling the intention implied in the title of his book, Mance offers a list of specific things you can do to demonstrate that you not only love animals but want to protect and support them (see excerpt). What makes this book so valuable and also a fascinating (while often deeply disturbing) read is that he gives us the background and thinking behind each of these suggestions.

Why should we make changes in our diets? The author takes a job in a slaughterhouse, seeing first-hand what happens to sheep and pigs; he notices that working there is about power -- our power over other sentient beings. Animal welfare laws are addressing some of the issues with factory farms, but they are not enough. Mance, himself a vegan, visits chefs and companies making plant-based meat substitutes. Other outings take him to a fish market in Vigo, Galacia, and a mussel farm.

Mance includes many more interesting stories in this book that prove how complex our relationships with animals are. Clearly in touch with cultural trends, he comes up with some wonderful analogies. For example, wondering if our actions follow though on our love of animals, he concludes they don't. "You could call it the Meatloaf caveat: I will do anything for love, but I won't do that. When it comes to giving up animal produce, the cost to us is small, but the benefit to animals is immense. So the Meatloaf exemption should not apply to actual meatloaf."

The spiritual practice of reverence is the way of radical respect. Henry Mance clearly gets this. After reading this book, you will see how you can practice reverence toward all kinds of animals. 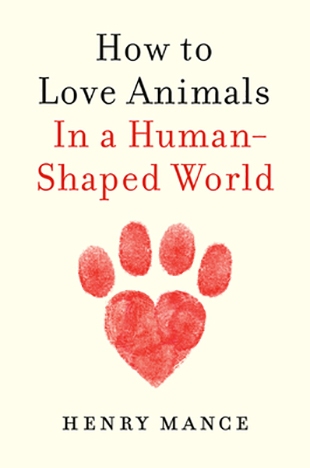 Of God and Pelicans: A Theology of Reverence for Live by Jay McDaniel

Peace to All Beings: Veggie Soup for the Chicken's Soul by Judy Carman

Blessings of the Animals: Celebrating Our Kinship with All Creation by Gary Kowalski