By Brandan Robertson
Channeling a passion for positive change.

Brandan Robertson is a name known to many, but most of them are likely under the age of 35. He’s one of the most eloquent and active young Christian theologians and activists — on TikTok, for example. Robertson is himself just 30 years old, but he’s also already the author of several books, has worked as a Christian pastor in San Diego, and is now pursuing a PhD at Drew Theological School in New Jersey.

His range of sources is impressively diverse. In chapter 11 called “The Shame Paradox,” for example, he quotes psychologists and feminist Jewish writers while also telling the story of “Marsha P. Johnson, the Black drag queen who refused to be ashamed of their identity and refused to face brutality at the hands of the police, so they threw a brick through the window of the Stonewall Inn in New York and launched the revolution for queer equity.” This is also the chapter that goes deeply into the Hebrew scripture book of Esther, which Robertson uses to explore what it was like for himself when he was “a closeted gay man seeking to be a pastor” who “lived with so much inner shame and tension.” Much of the author’s own story is present in these pages.

He concludes that chapter with this: “The call of the Spirit through the example of Queen Vashti is simply that: To show up in the world as yourself. To work to love, and not seek to change or conform, all the unique parts that make you, you.”

This is a book full of relevance, passion, and direction. Several of the chapters are forthright calls to readers to become agents of justice and change in their communities in “the way of Jesus.” Robertson, who emerged out of a fundamentalist version of Christian evangelicalism, still retains a missionary zeal. He channels that energy now in the service of progressive Christianity.

This is not a faith of certainty but of embracing questions and doubt. Chapter 15, “Diving into Doubt,” addresses this directly. Robertson insightfully interprets the life and death of Jesus this way: “He encouraged people to be skeptical of the motives and intentions of their religious systems. He invited them to be creative and innovative with their beliefs of Caesar’s claim that he was God…. And his injection of curiosity and doubt into their minds posed a threat to the security and stability of the system. So, they exile him. They marginalize him, and they kill him. And as Jesus is hanging on a tree, dying because of his willingness to be curious and to ask the hard questions, he himself faces the most fundamental doubt that all of us face. Doubt of God’s very existence.” This may even change how some Christians who wouldn’t call themselves “progressive” understand their Lord.

The “holy wars” of the title are the ways that Christians have become more divided politically than ever before in history, and the potentially tragic consequences of this for the future. You won’t avoid Trump here. But Robertson is good at not “standing above” the conflict between people; he has a way of speaking directly into it, as in this passage: “Sometimes when we are called to repent of our racism, sexism, homophobia, false idols, our desire for the 'way things have always been,' we feel like we need to defend or attack. We launch holy wars. We tell ourselves that we are in the right. We refuse to see the perspective of another. We refuse to rethink where we’re standing and how we’re thinking.”

And the “dry bones” of the title is a metaphor picked up from the Hebrew prophet Ezekiel who saw a valley of dry bones that the prophets would one day call the Spirit of God to bring back to life. It’s a beautiful vision, and so is this book. 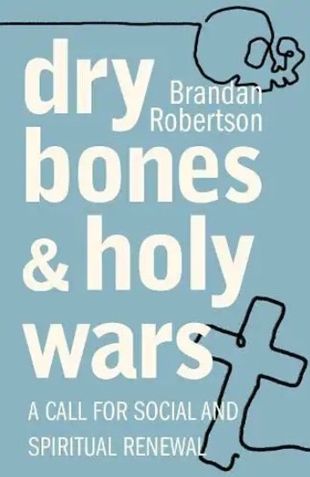