Sacred Nature Restoring Our Ancient Bond with the Natural World

By Karen Armstrong
An urgent plea to redeem ourselves and our world.

The world’s most respected living writer on religion, Karen Armstrong, has now turned to the natural world with religious intentions. She aims to demonstrate the necessity of considering the natural world as spiritually powerful, worthy of reverence, and connected intimately with us.

Armstrong — profiled in our Living Spiritual Teachers Project — excels at taking enormous topics and explaining them clearly to non-specialists without “talking down.” She does this again in Sacred Nature.

It is a shorter book than most of her others. A History of God and The Great Transformation, for example — both bestsellers — are also each three times longer than this book. But sometimes shorter is better. Those who pick up Sacred Nature probably don’t need convincing that climate change is real and our world is near a breaking point. Armstrong doesn’t dwell on those points.

Instead, she reclaims images and symbols of the earth from long ago that could help us now. “Many of our ancestors’ myths that we shall consider in this book taught them how to revere the natural environment,” she writes. Religions are made of myths and Armstrong doesn’t advocate the end of religion but rather rediscovering its imagination, for our survival. Why? She has a lot to say, but most pithily: “Recycling and political protests are not enough.”

Nature is sacred (chapter 2), and nature is holy (chapter 3), and Armstrong shows how and why these are not the same thing. Then at the end of each chapter there’s a section called “The Way Forward,” in which she gets specific and prescriptive. For instance, chapter 5 is “Sacrifice,” discussing how this theme weaves through most spiritual and religious traditions, from Judaism to Hinduism. Then, if the reader has begun to think how outdated it is to sacrifice animals, and symbolically offer other things as sacrifices to gods, Armstrong explains, “This chapter reminds us that religion is hard work. Its rituals are designed to effect a profound change within us.” She offers suggestions for rethinking airplane travel, burning fuels, and other means by which we might sacrifice, finally developing “a new reverence for nature, just as the sacrifice [of ancient times] learned to regard an unremarkable sheep as sacred.”

Gratitude is also essential here — it fills one of the late chapters and should fill human beings today if we are to revere the earth to survive. Ahimsa, too, fills a chapter. Ahimsa comes from the Dharmic religions of Hinduism, Buddhism, Sikhism, and Jainism and means nonviolence, or in Armstrong’s book, “harmlessness.” “It is a radical concept: it prohibits any kind of injury to others, however minimal that might be.” If we follow this principle, and the other teachings in this wise book, we might just survive. In the process, we will also learn anew who we are.

The epilogue includes this: “In order to redeem the natural world, we … should learn to align ourselves with it emotionally and realise our affinity with and utter dependence upon it. We must make a deliberate effort to look beneath the surface of nature and experience sacrality for ourselves, as Kabbalists, Muslims, Christians, Confucians, Daoists and Hindus have for centuries.”

I hope this book, too, becomes a bestseller. 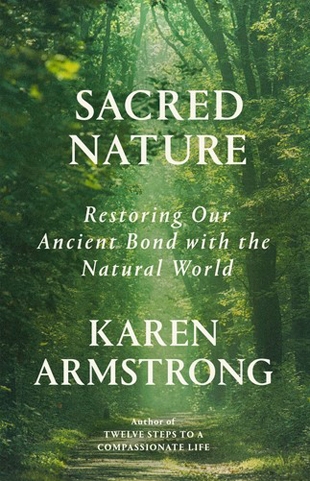