By Karen Armstrong
A solid and substantial case for compassion as a spiritual practice that can save the world.

This magisterial work fits right in with Karen Armstrong's bold mission to explore the place and purposes of religions in the modern world. It follows in the stream of her books on Christianity, Judaism, Islam, and Buddhism. She contends that during a period from 900 - 2000 BCE, four regions created the religious and philosophical traditions that have transformed the world: Confucianism and Daoism in China, Hinduism and Buddhism in India, monotheism in Israel, and philosophical rationalism in Greece. Out of the early seeds of the Israelite faith, the flowers of Rabbinic Judaism, Christianity, and Islam bloomed. She presents a chronological and in-depth assessment of the sages of this incredible "Axial Age" with portraits of the Buddha, Socrates, Plato, Confucius, Jeremiah, Ezekiel, the mystics of the Upanishads, Mencius, Euripides, and well as the later sages in their lines, including Jesus and Muhammad.

In the opening pages of this ambitious work, Armstrong states that the unprecedented violence of the twentieth century and the savaging of the good Earth make it very clear that we need spiritual resources to help us tame our egos and our tendencies to harm one another and the planet. Before the Axial Age, ritual and animal sacrifice had been the main sources of religious meaning: "The Axial sages changed this: they still value ritual, but gave it a new ethical significance and put morality at the heart of the spiritual life. The only way you could encounter what they called 'God,' 'Nirvana,' "Brahman,' or the 'Way,' was to live a compassionate life. Indeed, religion was compassion."

Throughout her overview of the religions developed in Israel, India, Greece, and China, Armstrong reveals that the sages were opposed to the violence that was rampant in their societies. But they also realized that it was not enough to just speak out against brutal and barbaric behavior. In their different locations, they all came up with the same approach to eradicate vanity, resentment, aggression, and the desire to dominate others. It was the empathetic spirituality of the Golden Rule.

We were quite impressed with Armstrong's treatment of the impact of Confucius who, like the Indian sages, saw the ego as the source of so much violence and cruelty. He taught that if people could move beyond selfishness and act instead according to altruism, the world would be a different place for them. This is also the impulse behind filial piety and other acts of gracious behavior. Confucius wanted people to be fully conscious of what they were doing. Instead of lording it over others, he emphasized dealing with others as equals. At the heart of the courtesy taught by Confucius was a deep respect or reverence for others.

To become a fully developed human being, according to nearly all the Axial sages, you have to abandon greed and unkindness and practice love. But not just love for those closest to you but love to strangers and the entire world! Armstrong also salutes the sages for their refusal to slight fear and pain. Suffering was an essential prerequisite for enlightenment. Facing death was another practice deemed important for human development.

The Axial sages were not perfect: they were indifferent to women and there was no female in their number. But their emphasis on the spiritual practice of compassion is one that has great relevance to the violence and warfare of the present age. Armstrong laments:

"Centuries of institutional, political, and intellectual development have tended to obscure the importance of compassion in religion. All too often the religion that dominates the public discourse seems to express an institutional egotism: my faith is better than yours! As Zhuangzi noted, once people interject themselves into their beliefs, they can become quarrelsome, officious, or even unkind. Compassion is not a popular virtue, because it demands laying aside of the ego that we identify with our deepest self: so people often prefer being right to being compassionate."

One of the many worthwhile things about The Great Transformation is that Armstrong shows that spiritual practice is what can unite the world's religions, despite differences in dogmas and beliefs. Christians, Muslims, Jews, Buddhists, and Hindus can work together on compassion projects to save the planet and ward off the toxins of constant warfare. The sages have given us spiritual practices to spur us to serve others in love. It's a simple but very important message: when we act from compassion, everyone becomes a brother and sister. 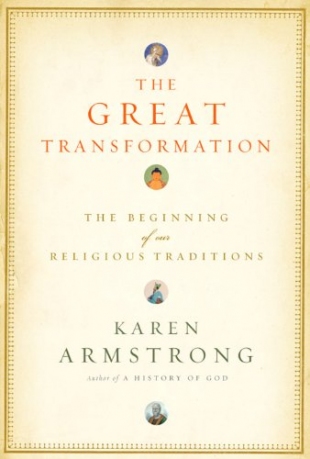