Pádraig Ó Tuama is a poet, theologian, and podcaster whose “Poetry Unbound” delights thousands of people every Sunday who listen to “On Being with Krista Tippett.” Like that program in general, “Poetry Unbound” (both podcast and now book) does an excellent job of exploring the biggest and most important questions in our lives, questions that don’t go away.

What does it mean to be human? How do we want to live? Ó Tuama explains — and demonstrates — how poems speak to these questions, with answers and also more questions, in ways that open up new possibilities.

We loved his opening paragraph describing what a poem is and does: “A poem is a difficult thing to define. What is it? It’s a little block of ink on a page, sometimes five lines long, sometimes fifty. It’s a house of memory. It’s a clockwork thing you can carry in your pocket; take it out, set it to go, and it goes. Tick-tock-tick-tock, it says, sometimes rhyming with itself. Some poems are full of love, and some of anger; some poems remember things that shouldn’t be forgotten, other poems fantasise about the future, acting as a warning for today. Some sound like a song, others like a story.”

He presents fifty poems in this 350-page book — poems that contain prayer, pain, power, history, grief, anger, doubt, ecology, joy, sexuality, exploration, friendship, death, and love. He writes short commentaries on each poem, introducing it, explaining it, offering from his own life how it has been important answering those basic questions.

Sometimes between poems and essays of commentary, there appears a short teaching about poetry in general, written by Ó Tuama, and these are often beautiful:

“If a poem’s like a house, then the house probably has many different entry points: a window, a door, a crack in the walls. Hell, you can probably burrow through the foundations and push up through the floor. A poem can offer dozens of entryways, opening them to many meanings.”

Every poet should cheer this book; it will create new readers of the genre. More importantly, spiritual teachers of all traditions should cheer it, because it creates new paths for wisdom and understanding.

There are some famous poets in here, well-published, but most of the poems are from living poets, focusing especially on younger poets in the beginning of their careers.

One example among the fifty is the poem titled “Prayer,” by American Muslim poet Faisal Mohyuddin. The poem fills a single page, and it is written in a way that may feel distant and unreachable to readers who are unaccustomed to modern poems using non-traditional form and structure. Ó Tuama begins his essay on it like this: “The first thing I notice about ‘Prayer’ is its form. Ten tiny stanzas arranged in two columns. How could the shape of this poem be described? When I initially read this poem I wondered if I was looking down at prayer mats from a height. Then I found myself wondering about the five pillars of Islam. Then I looked at the space between these elegant verses and thought how only smoke — or incense — could fill the space between them. The shape of this poem is one that invites us to look at the blank space; perhaps that itself is one of the messages of the poem, that prayer is what’s found in the in-between.”

I imagine this book will be used by book groups, study groups, and undergraduate classes to open up poetry and religion, which have both become increasingly foreign lands. In the process, readers will find spaces to explore their own spiritual lives and practices.

Ó Tuama doesn’t ignore the craft of poetry and of poets. There is talk of “stanzas” and “line breaks,” form and metaphor, but the value of this book is how it offers the world’s oldest way of speaking truth and meaning to twenty-first century people. 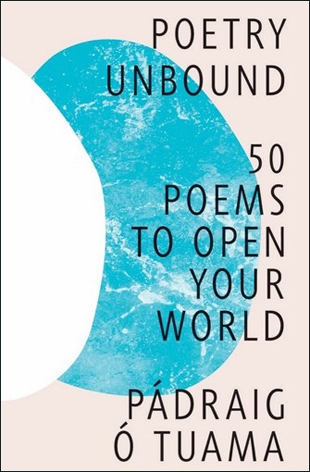