By Pico Iyer
A marvelously inventive novel about the spiritual transformation of an Englishman studying Sufism who falls in love and opens up to the bounties of mystery and surrender.

John Macmillan, an Oxford-educated Englishman, is in Santa Barbara, California, doing graduate level work on Rumi, the thirteenth century Sufi poet. Although one of his favorite lines from this seer is "Mysteries are not to be solved / The eye goes blind when it only wants to see why," he hasn't found a way to really live the truth of this spiritual insight. His search for lost Sufi manuscripts, particularly one thought to have been smuggled out of Iran during Khomeini's reign, takes him to many countries. An Islamic scholar in Damascus gives him a gift to be delivered to Kristina Jensen. John meets her sister Camilla when he completes this task. She is the archetypal California girl, a blonde actress who loves adventures and has been unlucky in love. Camilla is very attracted to John, but she disappears for long stretches of time.

Meanwhile, John wrestles with his fears of abandoning himself to love. He has left a woman back in England and is now totally consumed by his studies. He writes in one of his papers: "For the Sufis, the heart of life is mystery: everything we don't know. We are even mysterious to ourselves, they believe: a part of us going through the rituals of our daily life, while another part, a deeper part, cries out for whatever it is that can take us back. The stranger whose voice we recognize as our own." John feels quite adrift in the "shifting sands" world of California." Camilla takes him to see the whirling dervishes and to experience the mist of the mountains. Yet the more drawn to him she becomes, the more she fears that he, like others in her past, will abandon her.

John's expatriate Iranian professor Sefadhi recalls a Sufi tale in which "a seeker, knocking at his master's door, hears the sheikh call out, 'Who is it?' 'It is I, sir, me,' he responds, and the teacher's voice calls back, 'Go away! Where there is an 'I.' there can be no true instruction. Come back when you are no one.' " It is quite difficult for John to cast aside the formulas and pleasures of the intellectual life. It takes him a long time to see that Camilla incarnates the Sufi spirit that he yearns for, but has only been studying, not experiencing. The surprising and very satisfying developments in the last stretch of the novel bring John and Camilla to Iran for some mystical moments that open them up to the true marvels of a different kind of abandonment.

Pico Iyer is the author of many articles and books, including The Global Soul, a remarkable work of cultural criticism about the anxieties rife in our borderless postmodern world. This subtle and sophisticated novel offers many insights into the complexities of Sufism, the mystical expression of Islam. He explores the significance in this tradition of loss and saying yes to affliction; the popularity of Rumi's poetry in America; some of the differences between Christianity and Islam; and the spiritual potencies of transformation and surrender (or abandonment). 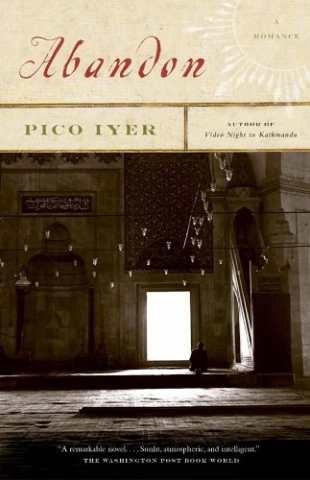