By Frederick Franck, Janis Roze, Richard Connolly
Answers to a vital and central question from thinkers and activists from around the world.

Artist and author Frederick Franck has stated: "It was only in my seventh decade that I realized that the question 'What does it mean to be human?' is the vital, the central, one to which all other questions and problems, spiritual, ethical, economic, and political are secondary.' For this inspiring paperback, he has gathered responses to this query from thinkers and activists from around the world. Many of them are distraught over the growing contempt for life that can be seen in war, poverty, human rights violations, capital punishment, slavery, and the trashing of the environment.

But there are small steps being taken to establish and extend a reverence for life. Albert Schweitzer's daughter recalls him saying once, "Dogma divides; Spirit unites." This divine infusion of grace into human affairs can manifest itself as liberal religion. Jack Miles claims that this force humanizes both religious absolutism and irreligious nihilism. Theologian Dorothea Solle recalls the mothers of the disappeared in Buenos Aires who used to walk in silence on the Plaza de Mayo every Thursday. She believed that they conveyed their reverence for life to all who saw them, even though they spoke no words. Charlie Musselwhite, a Mississippi-born singer, believes that the blues is a "music of the heart. It expresses all human emotions, everything that life can throw at you — all the ups and downs — it's all there. When you hear the blues it reminds your heart what it means to be human."

Our favorite piece, which equates reverence to life to the essence of humanity, is a Sufi story told by Benedictine nun Joan Chittister:

"Once upon a time there was an old woman who used to meditate on the bank of the Ganges. One morning, finishing her meditation, she saw a scorpion floating helplessly in the strong current. As the scorpion was pulled closer, it got caught in roots that branched out far into the river. The scorpion struggled frantically to free itself but got more and more entangled.

"She immediately reached out to the drowning scorpion, which, as soon as she touched it, stung her. The old woman withdrew her hand but, having regained her balance, once again tried to save the creature. Every time she tried, however, the scorpion's tail stung her so badly that her hands became bloody and her face distorted with pain.

"A passerby who saw the old woman struggling with the scorpion shouted, 'What's wrong with you, fool! Do you want to kill yourself to save that ugly thing?'

"Looking into the stranger's eyes, she answered, 'Because it is the nature of the scorpion to sting, why should I deny my own nature to save it?' " .

Other contributors include the Dalai Lama, Desmond Tutu, Oscar Arias, Mother Teresa, Elie Wiesel, Vaclav Havel, Yehudi Menuhin, Dorothea Solle, Nancy Willard, Ram DasS, Huston Smith, Satish Kumar, Harvey Cox, and many others. They challenge us to strive to be fully human and to reverence life with every ounce of our being. 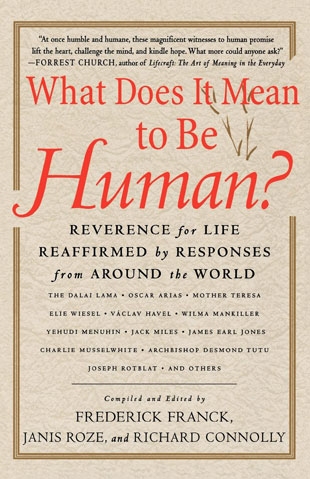