Meinrad Craighead: Crow Mother and The Dog God A Retrospective

By Meinrad Craighead
250 reproductions of the paintings of this visionary artist, along with a generous selection of her writings.

This sumptuous and sober-minded volume brings together 250 full color and black-and-white reproductions of the paintings and drawings of visionary artist Meinrad Craighead from the past 40 years. In addition to a wide swath of material from the artist's writings, there are interpretive essays by Rosemary Davies, who first met her at Stanbrook Abbey; Virginia Beane Rutter, a Jungian analyst and author of Embracing Persephone and Embracing Girls; and Eugenia Parry, an art historian.

Craighead was born in 1936 and raised a Catholic in Chicago and Little Rock, Arkansas. As a little girl, she was already drawing extensively. She took vows with a Benedictine monastic order at Stanbrook Abbey in England, staying there for 14 years. A need for an even more solitary existence precipitated her move to Albuquerque, New Mexico, where she has lived near the Rio Grande River with her favorite companions, dogs, ever since.

"My work is deeply experiential and meditative. I've been given a gift for communicating the spirit world in my own unique medium," Craighead has observed. These pages ably display her visionary art and all of its sense lusciousness and rich symbology. There is a fertile cross-cultural depth in her reverence for both the Black Madonna of her Catholicism and Crow Mother, the Hopi figure who fertilizes all of life; she has painted them both.

Dreams and shamanic journeys have played a large and important role in Craighead's art. It is here that she has become Badger, danced with the Great Mother in the kitchen, and learned from tortoise, bear, snake, wolf, and other creatures of the Earth. No wonder she once wrote: "Artists live in a spirituality of epiphanies. We are called to see and be seen, and the veil between the two is often thin. Living at the line between the visible and the invisible, we make our images of the Divine (however we define this) and have ever done so."

In her essay, Virginia Beane Rutter commends the various ways in which Craighead's art has been a source of solace and inspiration to women who are searching for their own creativity and spirituality. She sees in her treatment of the archetypes of the Great Mother, the Greek goddesses Demeter, Persephone, and Artemis, the Black Madonna, Hildegard of Bingen, and the Hopi Crow Mother a passport for women who want to bring alive the goddess powers in their own psyches. Rutter concludes: "The great gift of Meinrad's work to women is that it speaks directly to the heart and soul, the innermost place of the feminine interior garden, the well-spring of life."

Animals are everywhere present in Craighead's art. As Eugenia Parry points out in her essay "Animal Magnetism," these creatures of the Earth are living remnants of pre-history with special messages to convey to us. Craighead places herself and other human beings well below the level of beasts because of their extraordinary roles as healers, emblems of wildness, and emissaries of mystery. As this retrospective of her work reveals, Meinrad Craighead is a masterful explorer of the spiritual practice of connections, delving into the ties which bind us to the Great Mother, Earth, animals, water, trees, and much more. Savor the images in this exquisite volume and you will soon find yourself engaged in prayer and sacred meditation. 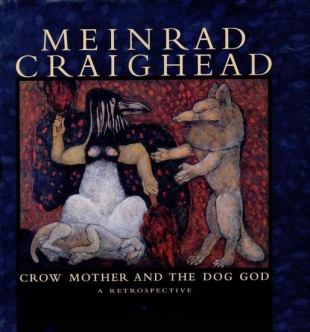