By Dietrich Bonhoeffer, Robert Coles
Delivers a rounded presentation of this theologian's legacy to us.

Dietrich Bonhoeffer (1906-1945) received his doctoral degree from the University of Berlin at age 21. After living in Barcelona, Spain, and in the United States, he returned to the same university in 1931 as a lecturer in theology. Bonhoeffer as a Lutheran helped organize the Pastor's Emergency League against the Nazi regime and was a leading spokesperson of the confessing church. He actively participated in the German resistance movement and was arrested and hanged after being implicated in the 1944 assassination attempt on dictator Adolf Hitler.

This volume in Orbis's "Modern Spiritual Masters Series" contains excerpts from Bonhoeffer's Christ the Center, a piece on costly grace from The Cost of Discipleship, an essay on spiritual formation from Life Together, thoughts on conscience from Ethics, and selections from the posthumously published Letters and Papers from Prison.

In his introductory essay, Robert Coles salutes Bonhoeffer's integrity as a Christian martyr. He notes that his spiritual legacy to us is "in the way he spent his time on earth, in his decision to live as if the Lord were a neighbor and friend, a constant source of courage and inspiration, a presence amid travail and joy alike, a reminder of love's obligations and affirmations and also of death's decisive meaning (how we die as a measure of how we have lived, of who we are)." 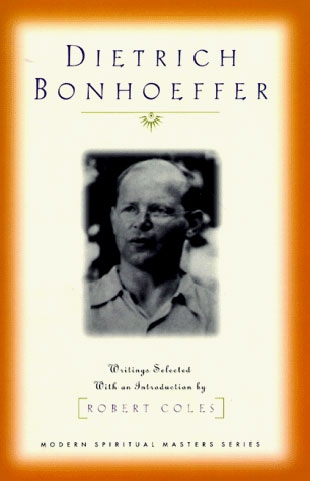