Good Karma How to Find It and Keep It

By Joan Duncan Oliver
A rounded and edifying survey of karma and its role in our lives and our world.

"Karma is a Sanskrit word meaning 'action,' though it's often used to refer to both an action and its results," writes Joan Duncan Oliver in this informative paperback that uses the same question and answer format as her Happiness: How to Find It and Keep It. She continues: "Many people think of karma as Newton's Third Law — 'For every action, there's an equal and opposite reaction' — as it applies to the psychological or ethical domain. Karma isn't luck or destiny — luck suggests randomness; destiny, a lack of choice. Nor is it the voice of the gods trying to keep us in line. Karma is a description of how moral law operates, not a prescription for good behavior." This teaching of the East is found in many cultures and religions. Just think of the adages "As you sow, so shall you reap" and "What goes around, comes around."

The law of karma states that every action has a consequence, but that doesn't mean that our lives are set in stone. We have choices or, as the Theravada Buddhist teacher Mahasi Sayadaw puts it, "We are at liberty to create fresh karma that leads toward either our progress or our downfall." At the same time, by our choices we make our lives a heaven or a hell. Karma is very much in evidence in relationships. We bring our own baggage into them and then try to create something new and different. Sometimes it works, and other times it doesn't. It is up to us and the intentions we bring to it.

The body, according to Oliver, is a karmic storehouse containing all that we've done and been along with the genetic code of our parents. Many blame others for what unfolds in the flesh, but we make our own future by our choices of diet, exercise, and self-nurturing. We can release, clear, burn, exhaust, or transform the karma we've accumulated. Further, Oliver reminds us, we're not just here to work out our own individual karma but also that of our families, communities, and nations.

This lively and thought-provoking paperback suggests various ways to think about karma and make the most of it in our lives and for the benefit of the world. 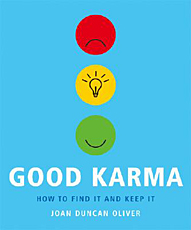