By Phillis Gershator
An exceptional children's book that reveals the spiritual nature of work.

"Our age," wrote Simone Weil just before her death in 1943, "has as its own particular mission, or vocation, the creation of a civilization founded upon the spiritual nature of work." Yet today children grow up with few models of individuals who love their jobs and try each day to do them to the best of their ability. That's why this inspiring beautifully illustrated book by Phillis Gershator is so welcome. It is for children five years and older.

Young Takeboki lives in Japan and takes a job working for the monks in the temple. His job is to sweep the springtime plum and cherry blossoms from the garden. Although he enjoys what he does, his family is worried about him and his humble position as a Flower Sweeper.

His older brother wants him to get a better job so he can travel. But Takeboki tells him that he visits mysterious places in the garden. The lines he rakes in the sand remind him of the ocean. His sister wants him to find a wife and worries about his lonely future. But Takeboki finds all he needs in his sweeping. His neighbors see him as a beggar although in the fall, he feels like a rich man when he puts all the golden leaves in piles.

The charming illustrations by Holly Meade vividly convey the joy and contentment Takeboki derives from the repetitive labors of his hands. He puts all of himself into what he does and winds up with a surprise at the end of his life. This exceptional children's book models the spiritual nature of work in a convincing and satisfying way! 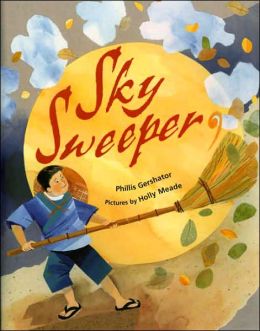