Against the Pollution of the I Selected Writings

By Jacques Lusseyran
Six posthumous essays exalting the soul in ways that are universal, breathtaking, and marvelous.

Every once in a while a book is released that simply exalts the soul in ways that are universal, breathtaking, and marvelous. Here are six posthumous essays by Jacques Lusseyran (1924-1971), a French writer, teacher, and activist during World War II in the Resistance Movement. He was imprisoned at Buchenwald until the U.S. Third Army liberated him.

Those familiar with Lusseyran's autobiography And There Was Light are already familiar with his ability to enchant with words. Three of the essays in this incredible volume deal with the author's blindness. Lusseyran does not see this condition as a disability: "Blindness changed my sight, but did not extinguish it." He writes poetically about his heightened senses of hearing and touch, his ability to pay attention and to remember. And then he salutes the inner radiance: "I knew that when the light was taken from me, I could bring it to life again in myself. I knew that when love was taken away from me, its spring would flow again in myself. I even knew that when life is at stake, it is possible to find its source within oneself."

That inner light is given further praise in the title-piece essay where Lusseyran challenges us to ward off the pollution of the I that comes in an avalanche of outward images, rules and regulations, and cultural distortions. He shows how he kept his inner light in tact while in the concentration camp through the serenity of a spiritual inmate ("Jeremy") and through the healing medicine of recited poetry ("Poetry in Buchenwald"). 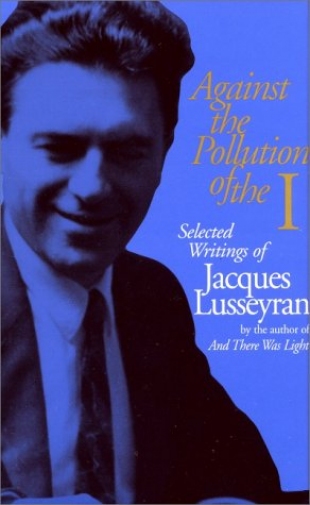