I Want to Be Left Behind Finding Rapture Here on Earth

By Brenda Peterson
A well-written and consistently compelling spiritual memoir from a lover of the Earth and all creatures.

A memoir recommended for those who have a passion for the earth, nature, and the environment and want to help preserve it for future generations.

Brenda Peterson is the author of 16 books including the nonfiction Build Me an Ark: A Life with Animals. In this well-written and consistently compelling spiritual memoir, she writes about her love/hate relationship with her zealous family of Southern Baptist fundamentalists. They are firm believers in the Rapture where "in the twinkling of an eye, they say, the righteous will ascend, dropping golden dental work, nightgowns, and perhaps some spouses." Her parents looked forward to another world which they believed would be far superior to this one. Her childhood consisted of a roundelay of prayer meetings, choir practice, and Bible study. Peterson disappoints her relatives by not winning a "sword drill" competition where she spouts memorized Scripture passages in a spelling bee-like contest. She also gets in trouble voicing her opinion that animals have souls and go to Heaven just like us when they die.

Peterson does share some fond memories of her youth — a love of studying earth science, playing the clarinet, and getting a short story published in the high school literary magazine. The best thing about the Southern Baptists, who did not smoke or drink, was the sensuality of their food shared at church gatherings — especially mouth-watering desserts.

Peterson makes a break from her past by attending the University of California. She likes science but one day she encounters some beagles who have been subjected to experiments in the school's laboratory. The author decides never to take a biology course again and focuses her energies on literature.

Peterson is thrilled when she lands a prestigious position on the editorial staff of the New Yorker in Manhattan. But after five years, she is still unpublished. Missing her primal connection with the Earth and animals, she decides to work five acres of a family farm in Colorado which she regards as her own little Garden of Eden. But the real satisfaction for Peterson comes when she moves to Seattle and finds a place she adores on the Salish Sea. Writing books, working as a part-time environmental writer and editor, and honoring animals in every way possible, Peterson finds a spiritual center in mystical Taoism which reverences the natural world.

As she mellows with age, she comes to see that both the fundamentalism of her parents and the radical environmentalists share a tragic vision of life: one emphasizing the fallout from toxic sin and the other fearing the extinction of all living things. Both peddle doom and gloom. Peterson takes several trips with her relatives and realizes that although they will never agree on the seriousness of climate change, they can harvest memories together. Peterson is also grateful for the inheritances from them: her mother's moral universe and her father's love of the land and all animals. 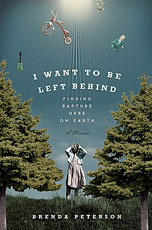