By Phil Cousineau
A collection of strange and marvelous words and their meanings.

Phil Cousineau is an award-winning writer, filmmaker, teacher, editor, independent scholar, travel leader, storyteller, and currently the host of Link TV's Global Spirit television series. He has published more than 30 books and has 15 script-writing credits. He is featured at Spirituality & Practice as one of our Living Spiritual Teachers.

In Wordcatcher, Cousineau gathered 250 words that have caught his fancy and tugged at his imagination. He has been a wordcatcher since growing up as a boy in Wayne, Michigan. At 15, he became a freelance writer and hasn't stopped writing since. Here he shares words from "Abracadabra" through "Zombification" that have aroused an "Aha!" when he first encountered them.

The Painted Word is, according to Phil Cousineau, "another collection of strange and marvelous, rare and recently coined, curious and sometimes hilarious words." He claims to have been riding "the carousel" of words since childhood when he would run across the room to peep in the old Random House Dictionary. Now as a prolific writer and savvy adult, the author agrees with comedian Stephen Wright who said: "I was reading the dictionary. I thought it was a poem about everything." Reading the pages of this beguiling paperback, we sense Cousineau's delight and enthusiasm for words and their ability to enchant and mesmerize.

The set-up is sharing a special word, delivering a short essay on it, and then listing companion words that are close to it. Some of our favorite entries are ensorcell (to bewitch or enchant), fathom (to understand the depths), flabbergast (to astonish), flamboyant (theatrical), gloaming (twilight), plucky (courageous), and voluptuous (desirable).

Pass The Painted Word on to your friends or family members who love books in the way Kenko does: "The pleasantest of all diversions is to sit alone under the lamp, a book spread out before you, and to make friends with people of a distant past you have never known." 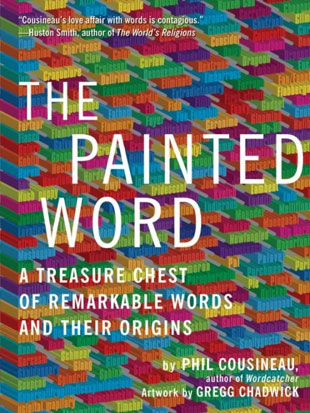