By Rami Shapiro
Good news about the grace of God and its major role in Judaism.

Rabbi Rami Shapiro is a renowned teacher of spirituality across faith traditions, a noted theologian, and an award-winning storyteller, poet, and essayist. He has written many books and is a popular speaker and workshop leader. He has led e-courses for Spirituality & Practice and is profiled in our Living Spiritual Teachers Project.

In this timely volume, Rabbi Rami opens the Jewish-Christian door of dialogue a few feet further with his affirmation of grace — chesed — as a major dimension of Judaism. Although religious scholars and students claim that justice is the predominant concept on the Jewish path, the author is convinced that grace is even more important with its emphasis on "God's unlimited, unconditional, unconditioned, and all-inclusive love for all creation."

What is this God of grace really like? Shapiro imagines God to "be be-ing itself manifesting time, space, and everything that occupies them. God isn't a noun but a verb; God isn't a being but a doing, and what God does is called grace." Got it? There is no need to win or achieve grace because it is freely given. We have the choice to accept or reject it. In the Talmud we read:

"Even if 999 angels testify against humanity and only 1 speaks on their behalf, the Holy One, blessed be, inclines the scales in humanity's favor."

Once we accept the astonishing grace of the Holy One as the operative principle of our lives, we will be able to see the creation of the world, the covenant, forgiveness, and faith with fresh eyes. As we read Shapiro's commentary in these chapters, we sense his respect for the wildly creative aspects of chesed and his acceptance of the idea of letting God be God operating outside the precincts of human reason and rigid beliefs.

For Rabbi Rami, mitzvoth, the traditions, commandments, and practices of Jewish life are all animated by the abundant and never-ending grace of God. He spells out the importance of "the Ten Sayings" and the Sabbath with just the right mix of reverence for tradition and creativity. The end result is a passionate plea for us to choose life. 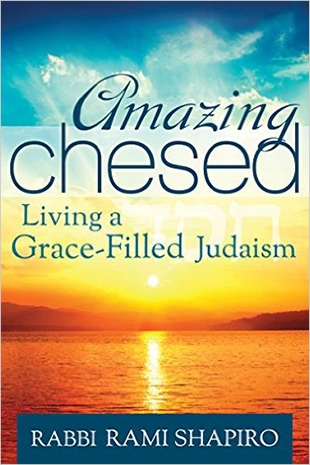