By Walter Wink
A subversive and substantive view of the incarnation and the challenges humans face as co-creators with God.

Walter Wink is Professor of Biblical Interpretation at Auburn Theological Seminary in New York City. He is the author of the award-winning Fortress Press books Naming the Powers (1982), Unmasking the Powers (1986), Engaging the Powers (1992), and When the Powers Fail (1998). In those volumes, Wink explored the forces that prevent people from becoming more human. In this work of great depth and insight, the author has attempted, in his own words, "to gain some idea of what it means to become more human." Read this subversive theological work at your own peril. It will scorch your traditional way of looking at Jesus and challenge you to see yourself very differently.

Wink begins with an examination of the perplexing term "the son of man" which appears in the Hebrew scriptures, mainly in Ezekiel. He then goes on to reveal that Jesus used this term to refer to himself again and again: "In Hebrew, the phrase simply means 'a human being.' The implication seems to be that Jesus intentionally avoided honorific titles, and preferred to be known simply as 'the man' or 'the human being.' Apparently he saw his task as helping people to become more truly human."

For Wink, the quest for the historical Jesus is a search for the carpenter from Nazareth who condemned all forms of domination and sought to set people free from the multiple prisons constructed by themselves or those in positions of power over them. A lot of this has been obscured by those who emphasize Jesus coming down from heaven in order to incarnate God. Wink turns the tables here and says: "I would prefer to say, Jesus incarnated God in his own person in order to show all of us how to incarnate God. And to incarnate God is what it means to be fully human."

Wink speaks directly to this dilemma: "When we make Jesus the sole incarnate Son of God . . . we empty ourselves into transcendence. All healing power, all authority, all ecstatic union with God is focused in this one exemplary person (and perhaps in Mary and a few exemplary saints). . . . So I diminish myself by projecting all the divine powers within me onto Jesus."

Then Wink takes the radical step to offer Christians and others a different way of regarding Jesus' importance for our time: "The implications of these reflections are profound. It means that we are free to go on the journey that Jesus charted rather than to worship the journey of Jesus. This means we are to be cocreators of God. It means that we can, if we have the courage, recover the healing ministry of Jesus and his very Jewish kind of persistent prayer. It liberates Jesus from the cloying baggage of christological beliefs added by the church. It strips away the heavy accretion of dogma that installed Jesus as the second person of the Trinity, and instead makes him as available to Jews or Muslims as to Christians, indeed, available to anyone seeking the Human Being within. It takes Jesus out of the ghetto of the churches and offers him to anyone looking for a guide to true humanity."

Lutheran theologian Dietrich Bonhoeffer in his last days said something similar: "The Christian is not a homo-religiosus, but a man, pure and simple, just as Jesus was a man." This emphasis opens Christianity up to many more people. Wink's wonderful work here brings to mind a scene in the movie Dances With Wolves where Kicking Bird says to John Dunbar: "I was just thinking that of all the trails in this life, there is one that matters more than all the others. It is the trail of the true human being. I think you are on this trail and it is good to see." Walter Wink would have us see Jesus as a scout showing us to the trail of the true human being, who never wanted to travel it uniquely or alone. 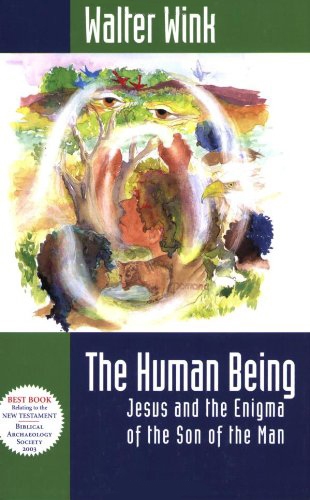