Running the Spiritual Path A Runner's Guide to Breathing, Meditating, and Exploring the Prayerful Dimension of the Sport

By Roger D. Joslin
Practices that can enrich your communion with God and open your heart while you are exercising.

Roger D. Joslin is currently preparing for the priesthood at the Episcopal Theological Seminary of the Southwest in Austin, Texas. He is also one of the 21 million runners and joggers in the United States who enjoy the health and fitness benefits of rigorous exercise. In this refreshingly cogent and practical work, Joslin reveals the many ways in which a regular run can be turned into a lively and enriching encounter with the Divine. He notes: "Running the spiritual path doesn't mean that you are going to attain enlightenment in a hurry. Running is simply another means of traveling the path. The path is both circular and spiraling. There is no hurry and goals are meaningless. God exists all along the path and at all levels. Our task is to be aware of that Presence as we move along it. The true runner can see God more clearly while running."

Joslin is to be commended for the eclectic spiritual practices from nearly all the world's religions that he has gathered in this work. He has in a very natural and appealing way incorporated many of them into rituals for almost every dimension of running. Here, for example, are some preparations that open the mind, body, and spirit to the bounties of grace that can show up as you exercise:

"Prepare mindfully for the run. Dress slowly, methodically, as if you were a devout priest and your running clothes were sacred vestments. Pay special attention as you put on your socks and shoes, lacing your shoes carefully. Just as a priest uses his hands to prepare the sacrament, your feet will be the contact point between your body and the sacred earth. Hold onto an awareness of that fact.

"If you begin by stretching, focus all your attention on each muscle being stretched. Just before you begin to run, say a silent prayer, asking for God to be present on your run and to aid you in your effort to be present to the Divine."

Throughout the book, Joslin sprinkles excerpts from the running journals he kept from 1993 through 2001. He has participated in races and experienced the joys of jogging on the beaches of Padre Island, on the grounds of an Oblate monastery, across the desert in Big Bend National Park, down Las Vegas Boulevard, along the London road in Brighton, England, and through Manhattan's Central Park. The author lays out the essentials of running meditation that has some of the same virtues as sitting or walking meditation.

Another delightful element of this book is the wide variety of practices he adapts for the particular experience of running. Check out one from Anthony DeMello, where the author imagines Jesus running alongside of him and looking into the faces of all the people they encounter. For a Sufi inspired run, you can visualize the heart being massaged — or polished — by your breath. The smiling run is enhanced by maintaining a Buddha-like half smile which lifts the spirit of the runner and projects joy to those he or she meets. The path of gratefulness running is characterized by a keen sense of thanksgiving to God for all the wonders in the world. Running with alms involves carrying some money with the intention of giving it away.

Although Joslin is a Christian, he has modeled a way of respecting the practices of other religions in addition to creating contemporary expressions of ancient practices. Here you will find both old and new mantras to use with inhaling and exhaling. One of our favorites is silently chanting "Toward the One" from the Sufi teacher Pir Vilayat Inayat Khan.

With this book on running as a spiritual practice, Joslin inspires us to bring intention and purpose to any activity we do regularly, seeking communion with God whether we are cooking, cleaning the house, or commuting. In other words, you don't have to be a runner to get guidance from this practical book. 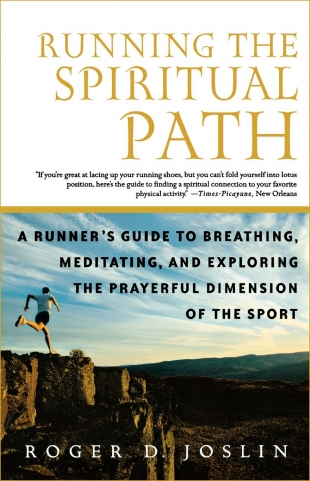