Creating True Peace Ending Violence in Yourself, Your Family, Your Community, and the World

By Thich Nhat Hanh
A watershed work filled with everyday practices to prevent war in our personal and public lives.

"True peace is always possible," declares Thich Nhat Hanh in this watershed work. "Yet it requires strength and practice, particularly in times of great difficulty. To some, peace and nonviolence are synonymous with passivity and weakness. In truth, practicing peace and nonviolence is far from passive. To practice peace, to make peace alive in us, is to actively cultivate understanding, love, and compassion, even in the face of misperception and conflict. Practicing peace, especially in times of war, requires courage."

This peacemaker knows of what he writes. He has survived three wars, persecution, and more than 30 years of exile from his native country, Vietnam. This book has grown out of his experiences as a Buddhist monk, a retreat leader on the art of mindful living, the author of more than 100 books of teachings and poetry, and a world leader in the nonviolence movement. In addition, he has offered spiritual advice to American Vietnam War veterans, Israeli and Palestinian activists, psychotherapists, artists, environmental activists, children, and others.

Thich Nhat Hanh's teaching has a very practical quality to it. In this volume he writes about creating peace in our personal lives, families, neighborhoods, spiritual communities, society, and world. Many of the practices have been honed in the monastic community he founded in France, Plum Village, as well as two centers in the United States, the Green Mountain Dharma Center in Vermont and Deer Park Monastery in California. Throughout his years of service, Thich Nhat Hanh has been a pioneer in "engaged Buddhism" which views meditation practices and social activism as being of one piece.

Both war and peace reside within each of us. Thich Nhat Hanh uses the image of the many seeds that are in our minds: seeds of understanding, wisdom, and forgiveness; as well as seeds of ignorance, anger, fear, and hatred. Peace and nonviolence start with us when we refuse to water the seeds of war by our actions. The spiritual teachings of all traditions challenge us to cultivate the seeds of compassion, love, kindness, nonviolence, openness, and reconciliation. Practices, guided meditations, and other exercises included here help us calm our emotions, acknowledge our interbeing with others, and extend the circle of compassion.

We were heartened to read that Thich Nhat Hanh sees the spiritual practice of openness -- the willingness to accept diversity and to approach others with a receptive heart and mind -- as essential to the practice of nonviolence. "Exclusion, getting caught in our views, is a deep-seated habit that arises from fear and misunderstanding of others. To transform our habit of excluding others, we must practice and develop understanding and compassion in all parts of our life." This is a deep teaching since when we are resisting nonviolently, we still may be excluding our opponents from our care and concern. War at home and abroad comes from our attachment to certain ideas and ideals that separates us from others and quite naturally brings out their enmity.

Those familiar with Thich Nhat Hanh's work will recognize one of his core themes in the discussion of practicing peace toward our own pain, anger, or despair. Here, for example, is the practice of acknowledging our fear and not going to war against it. Bringing our awareness to it, we say, "Hello fear, I know you are there." Eventually, this emotion will pass through us, and other emotions come to the fore. This is a particularly good practice to teach children so they don't wind up acting in self-destructive ways. Thich Nhat Hanh also presents concrete examples of "peace treaties" we can make with ourselves: beginning anew, a practice of reconciliation and renewal, a peace treaty for couples, a wonderful wallet reminder practice to keep love and compassion alive in our relationships, and much more.

"The war stops and starts with you and me," notes the author. The seeds of peace, compassion, and kindness are encouraged to bloom in a meditation for embracing and nourishing positive emotions.

Try a Spiritual Practice on You

When the war starts on one channel in your mind, switch the channel. The Buddha called this practice "changing pegs," replacing one emotion with another. There are plenty of examples of how to do this in Creating True Peace. In the closing chapters, Thich Nhat Hanh has some healing words for the violent and aggressive actions of the United States along with some suggestions for a Council of Sages to listen to people who feel they are "victims of discrimination, exploitation and social injustice." He ends with a manifesto circulated by the United Nations that presents guidelines for peacemaking in a global community where "each of us depends on the well-being of the entire human population." This is in conjunction with the UN declaration of the decade 2001-2010 as the International Decade for the Culture of Peace and Nonviolence for the Children of the World. 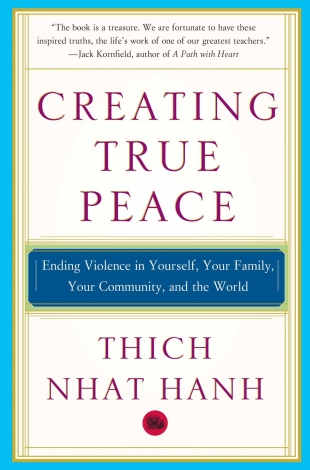