By Marcus J. Borg
A bellwether work that sets out in cogent, compassionate, and imaginative terms the direction of the Christian way in difficult times.

Progressive Christians have been waiting a long time for a bellwether volume that sets out in cogent, compassionate, and imaginative terms the direction of the faith in difficult times. Episcopal Bishop John Shelby Spong opened the gate with his book A New Christianity for a New World. Marcus Borg, Hundere Distinguished Professor of Religion and Culture at Oregon State University, takes us all the way home. Borrowing a phrase from Kenneth Burke, he suggests that discerning the heart of Christianity involves us in an "unending dialogue." This ambitious, substantive, and boldly political resource establishes the terms for a conversation that will no doubt continue for years.

In the first three chapters, Borg lays out the conflict within Christendom between those who cling to an earlier paradigm, with its emphasis upon faith as believing, requirements and rewards, and the afterlife, and those who align themselves with an emerging paradigm of Christian life as relational and transformational. He discusses the essential differences between the two camps vis-à-vis the Bible (the heart of tradition), God (the heart of reality), and Jesus (the heart of God).

Before we can relax into this clearly delineated situation, Borg surprises us, calling on mainline Christians to reclaim the Biblical term of being "born again" as a way of drawing closer to their more conservative brothers and sisters. He sees this "rich and comprehensive notion" as a spiritual one which involves "becoming conscious of and intentional about a deepening relationship with God." Another dimension of being born again is taking seriously the call to be just and to care for the poor and the downtrodden. "Seeing the political passion of the Bible calls us to a politically engaged spirituality," he writes, and with great clarity and courage, he suggests concrete consciousness-raising projects that churches can undertake to protest the domination systems that harm the most vulnerable among us — widows, orphans, the poor, and the marginalized.

In the most creative and visionary chapter, "Open Hearts and Thin Places," Borg mines the many meanings of heart with quotations from the Hebrew Bible and Christian tradition, concluding it is "the spiritual center of the total self." We need to be born again because we have closed hearts. In contrast, an open heart can sense the movements of grace through what Borg calls the "thin places" (a Celtic term) in our lives.

Another important element in Borg's imagining of the Christian way is practice, which he defines as "the formation of Christian identity." Churches are just beginning to respond to this after centuries of neglecting the resources of the desert fathers and mothers, the mystics, the monastics, and other mentors of daily practice. Now there is much talk about disciplines of prayer, more emphasis upon the spiritual practices of hospitality and compassion, and new interest in liturgical renewal in a variety of forms. The author concludes: "In my judgment, the single most important practice is to be part of a congregation that nourishes you even as it stretches you."

Finally, Borg delineates some of the challenges of being Christian in an age of pluralism. "When Christianity is seen as one of the great religions of the world, as one of the classic forms of the primordial tradition, as a remarkable sacrament of the sacred, it has great credibility. But when Christianity claims to be the one true religion, it loses much of its credibility." Although Borg does not mention it, the real meeting point between all the world's religions is the heart and the spiritual practices of love, compassion, kindness, and hospitality. Hopefully, Christian congregations will seize the moment and make this watershed work the focus of their adult education programs and small study circles. 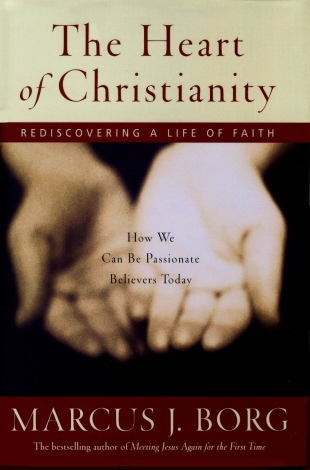