By Mary Margaret Funk
A salutary and illuminating work of interfaith wisdom by a Benedictine nun.

For the past seven years, Mary Margaret Funk (Thoughts Matter: The Practice of the Spiritual Life and Tools Matter for Practicing the Spiritual Life), a Benedictine nun, has participated in a series of formal Muslim-Catholic dialogues sponsored by the United States Conference of Catholic Bishops and hosted by Dr. Sayyid M. Syeed of the Islamic Society of North America. She is the Executive Director of Monastic Interreligious Dialogue and lives in Beech Grove, Indiana. In this salutary and illuminating work of interfaith wisdom, Funk demonstrates the insights that can flourish in tandem with the spiritual practice of hospitality. Early on she states:

"I have been pleased and awestruck at my Muslim dialogue partners' connection with and consciousness of God — the same God I love and obey — whom I call God the Father and whom they call God with no Second. Therefore, while Muslims differ from Catholics, without a doubt we can affirm one another in our way of life under this same God that transcends all of us."

With great clarity and succinctness, Funk examines Islam starting with the life and work of Muhammad, the great prophet, visionary and family man. She explains the five pillars of Islam — the profession of faith, five-times-a-day prayer, almsgiving, fasting, and pilgrimage — and examines key aspects of this faith — the cultural context of the desert and Islam as a civilization, the cohesiveness of the word/observance/unmediated symbol system, the belief in God's blessings through economic prosperity, and the idea of ascendancy that comes about through the belief that previous revelations in Judaism and Christianity have been fulfilled in Islam. She also addresses three areas that are often brought up in regard to this tradition — Islam and fundamentalism, women's rights, and democratic principles.

This is an illuminating appreciation of Islam by a Christian. For us, the most significant portion is Funk's commentary on almsgiving. She makes the valid point that while Christianity has historically been concerned about right doctrine (orthodoxy), Islam has from its beginning been primarily a way of living (orthopraxy). Traditionally, Muslims give 2.5 percent of their wealth to the poor, and this stems from Muhammad's alarm over the gap between the rich and the poor. "Giving to the poor is not a matter of mercy or charity on the devotee's behalf. It is a matter of justice." Here is something that is desperately needed in a world where the gap between the haves and the have-nots is growing larger every day. The spiritual practice of justice via the redistribution of wealth is one that Jews, Christians, Muslims, and Buddhists can all work on together.

Funk rejoices in the similarities in the devotional lives of Benedictines and Muslims: "Morning, noon, and night offer a natural impulse of the human spirit to rise and give praise. When I was present for the Muslim salaat, I felt as though I was at home with my nuns in Beech Grove, Indiana. It was the same God, the same praise and the same bended knee. This is why, as a gesture of solidarity with my Muslim friends, every morning after a twenty-minute sit in the oratory I bow my forehead to the floor. I am not sure I am pointing toward any city here on Earth, let alone Mecca, as I sometimes sit in a different seat in the oratory. However, I am sure it is the same God to whom Muslims and Catholics alike direct our hearts."

This book concludes with an afterward by Islamic scholar Dr. Shahid Athar, who comments on Sr. Mary Margaret's ideas from an American-Muslim perspective. Islam Is . . . An Experience of Dialogue and Devotion is one of the best spiritual books of the year. 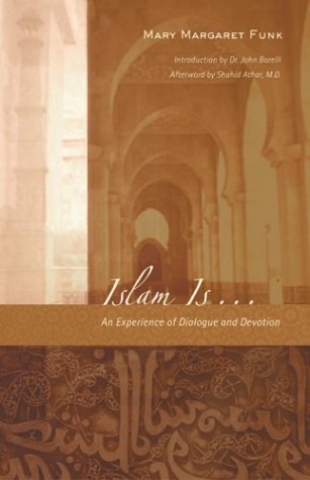