Doorkeeper of the Heart Versions of Rabi'a

By Charles Upton
Stories and poems by this ardent and ascetic Sufi saint.

"One day a rich merchant visited Rabi'a
And saw that she was living in a ruin:
So he gave her a thousand pieces of gold
And told her to buy a new house —

But the day she moved in, she became so fascinated
With the beautiful paintings that covered the walls
That she gave the rich man back his money
And went back to live in her ruin — why?

'Because I was mortally afraid
I might fall in love with that house,' said Rabi'a."

This is one of the many stories told about Rabi'a (717 - 801), a major saint of Islam and one of the central figures in Sufism. She was born in Basra in ancient Mesopotamia, what is now Iraq. After her parents died in a famine, she and her sisters were separated. Rabi'a was captured and sold as a slave. Later on in her life, she was freed by her master and may have made her living as a flute player at one time. Rabi'a was known for her devotion to God and her rigorous ascetic practices. Translator James Upton, in his introduction to this Sufi saint and poet makes the following comparison: "If Rumi is the Ocean, Rabi'a is the Well." The stories about her and the poems have come down to us through the generations and the grace of Attar, her major biographer and al-Ghazzali, the towering figure who unifies Sufi lore and orthodox Islam tradition.

There are several edifying and witty pieces in this paperback on prayer. In one, Rabi'a writes:

"O God, take away the words of the devil
That mix with my prayer —
If not, then take my prayer as it is, devil and all."

There are quite a number of stories about the only miracles that count, namely the gracious and often surprising ways that God acts in our lives. Here is one:

"One day, when Rabi'a was about to boil some meat Hasan of Basra dropped by. "Speech about divine things is better food than anything cooked in a pan," she said, and laid the meat aside. They talked until evening.

"Then they decided to break their fast. Rabi'a laid out dry bread and water, and then reached for the pan. She burnt her hand. The pan was bubbling over, the meat cooked. She took it out and served it: it was the best meat either of them had ever tasted.

Rabi'a's two most famous images are included here. In the first, she states:

"I love God: I have no time left
In which to hate evil."

That's a good one to keep in mind when there is so much talk about fighting evil ones and overcoming the dark forces which surround us. The other zeroes in on the same theme:

"I carry a torch in one hand
And a bucket of water in the other:
With these things I am going to set fire to Heaven
And put out the flames of Hell
So that voyagers to God can rip the veils
And see the real goal." 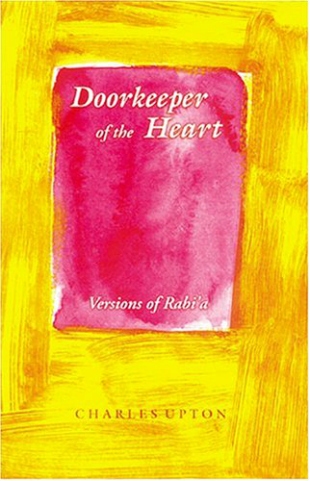