A Terrible Love of War

By James Hillman
Sends us inward to confront our own Mars-like capacities and the unsavory connections between the winds of war and the certainties of monotheistic religions.

"War belongs to our souls as an archetypal truth of the cosmos. It is a human accomplishment and an inhuman horror, and a love that no other love has been able to overcome," writes internationally renowned lecturer, teacher, and psychologist James Hillman in this inventive, thought-provoking, and hard-hitting examination of the complex place of war in our minds, souls, history, and culture. The bestselling author of The Soul's Code states at the outset that to understand any phenomenon, the imagination must activated: "No syndrome can be truly dislodged from its cursed condition unless we first move imagination into its heart."

With great élan, he probes the myths, the philosophy, and the theology of war's mind. This means confronting the bravery and the ballyhoo, the comradeship and the hatred for the enemy, the exhilaration of battle and the degradation of unleashed anger, the destruction of the earth and the desolation of human communities, the yearning for victory and the depression that settles over the human spirit years after the conflagration has ended.

Hillman locates the god Mars in the plans of generals, in the souls of soldiers, and in the fierce competitiveness and barbarity of humankind in general. Despite the meaningless of so much death and destruction, war is filled with meaning for many who participate in it. After World War II, a Frenchwoman said to J. Glenn Gray: 'You know that I do not love war or want it to return. But at least it made me feel alive, as I have not felt before or since." Many books and movies affirm this truth about the impact of war. Hillman laments the fact that America's war veterans are often marginalized, despite their having confronted the shadow issues that most citizens still refuse to face. "We pay them off with veterans' benefits instead of reaping the benefits they could bring."

The author points out that "Christian culture has inspired the greatest long-lasting war machine of any culture anywhere." Right now, one such culture, the United States, is gunsmith to the world and that includes the very terrorists who are stirring up trouble in many cities around the globe. Hillman challenges Christians to examine their consciences and to ponder the link that has existed for centuries between faith and the furies of warlike behavior toward unbelievers, freethinkers, and believers of other religions. A Terrible Love of War is a very timely book that sends us inward to examine our own Mars-like capacities and our refusal to take seriously the reasons why the winds of war are blowing so fiercely in our time. 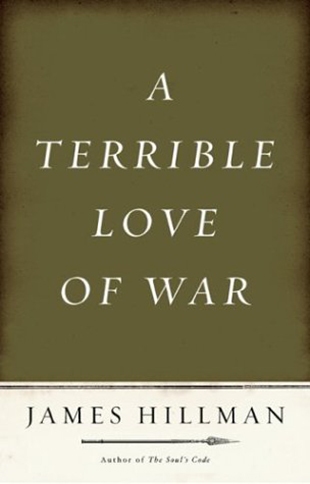