The Ecstasies of St. Francis The Way of Lady Poverty

By John Ryan Haule
Explores this saint's many spiritual practices, including the practice of poverty.

During the life of St. Francis of Assisi, the church authorities were not comfortable with his radical view of poverty. He modeled his actions on Jesus and lived a way of service that inspired generations. In this compelling work, Jungian analyst John Ryan Haule (Divine Madness: The Archetypes of Romantic Love, The Love Cure, and Perils of the Soul) examines Lady Poverty as Francis's guide in love. For the saint, she represented a reversal of values which put the proper emphasis on generosity and dependence on God's grace. This reversal, in turn, gave him a technique of ecstasy and a way of combating the ego. Of course, as Francis found out, the ego is so tricky that it can even take pride in doing good: "When Francis caught himself indulging in vainglory after giving his mantle to the old woman, he was horrified to discover that he was loving himself. The ideal of giving away 'for the love of God' had served only as a self-deceptive cover to hide the fact that he was redirecting the glory to himself."

Haule has some very interesting things to say about how Francis battled his emotions through the practice of equanimity. He had regular spiritual practices which kept him focused on the sacred cosmos. He silently recited verses from the Bible and his own compositions, a practice similar to Hindus doing japa or mantra prayer.

Haule also looks at this saint's wonderful connection with the natural world and his closeness to animals, who could sense his inward peace and kindness. He concludes with an assessment of Francis's stigmata. This is a very unusual treatment of the beloved saint that is sure to arouse many emotions and perhaps even give you some new spiritual practices. 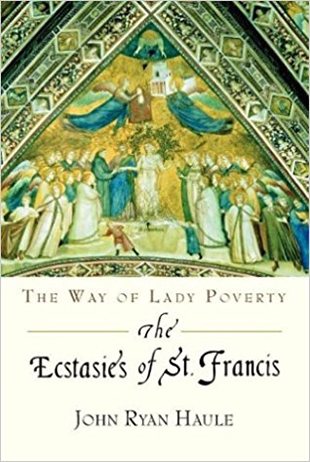