By Richard Louv
A hard-hitting and revealing study of today's wired generation of children who have little or no connection with nature.

Journalist and child-advocacy expert Richard Louv used to love to roam in the woods and climb trees when he was a boy. But today's children have little or no direct contact with nature. This separation from the natural world has some dire side effects, including a diminished use of the senses, attention problems, and increased emotional and physical diseases. The author spent 10 years traveling around the country talking to parents and children, college students, teachers, scientists, religious leaders, child-development researchers, and environmentalists.

"Nature-deficit disorder" is not a medical condition but a description of the symptoms that are displayed when children are cut off from nature. How did this happen? Louv points to the proliferation of technology; cable TV, video games, home computers, and the Internet have all cut into the time children could spend outdoors. Kids in the wired generation may be able to spout data about the Amazon rain forest but they've logged no time in the nearby woods. In one interview a fourth grader in San Diego said: "I like to play indoors 'cause that's where all the outlets are."

Anyone who has experienced the delights of direct contact with nature knows that this experience can reduce stress, foster self-confidence, and increase creativity. But, notes Louv, the media, schools, families, and neighborhood regulatory structures have "scared children straight out of the woods and fields" and given in to a litigious culture that favors organized sports over unsupervised play in nature. Today 47 million Americans live in homes ruled by condominium, cooperative and homeowners' associations where community covenants exclude private gardens or the free play of children outdoors. In addition, many parents are raising their children with cautions about "stranger danger," an exaggerated fear of violent criminals, sexual predators, and kidnappers. In a 1991 study, researchers found that the radius children were allowed to roam outside their homes decreased to a ninth of what it was 20 years before. Another study found that 41 percent of children ages 8 to 11 worry about being safe in their neighborhoods. Since very few schools offer any outdoor nature programs, it's no wonder that many kids see nature as another thing to fear.

Louv salutes organizations, urban planners, environmentalists, and educational institutions that are coming up with fresh ways to combat nature-deficit disorder. In one of the concluding chapters, he examines the spiritual necessity of nature for the young. Hopefully all readers of this important wake-up call will get involved and foster nature-child reunions as soon as possible. 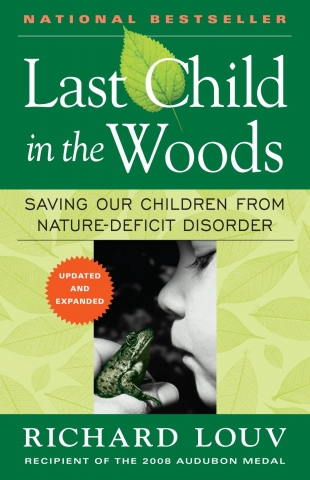