"Religious fundamentalism is dangerous because it cannot accept ambiguity and diversity and is therefore inherently intolerant. Such intolerance, in the name of virtue, is ruthless and uses political power to destroy what it cannot convert," so declared Rev. Peter J. Gomes in an Op-Ed article for the New York Times in 1992 who died on February 28th, 2011 in Boston. With his passing America — truly, the world — has lost a powerful spiritual voice against intolerance against homosexuals. His teachings will live on in his many books encouraging all to revisit the Bible with an "ongoing context and a community of interpretation to keep [it] current."

Peter Gomes was born in Boston, Massachusetts in 1942. He was an American Baptist minister ordained by First Baptist Church of Plymouth, Massachusetts. Since 1970, he served in The Memorial Church, Harvard University; and since 1974 as Plummer Professor of Christian Morals and Pusey Minister in The Memorial Church. In 1991 he announced that he was gay and became one of America's most prominent spiritual voices against intolerance.

In 2006, he was given The Preston N. Williams Award by Harvard Divinity School, and Harvard University in 2001 presented him with The Phi Betta Kappa Teaching Award. He was an Honorary Fellow of Emmanuel College, The University of Cambridge, England, where the Gomes Lectureship was established in his name. Widely regarded as one of America's most distinguished preachers, Professor Gomes fulfilled preaching and lecturing engagements throughout America and the British Isles.

Gomes served as Harvard University trustee of The Museum of Fine Arts, Boston, and a trustee of the Roxbury Latin School and of Bates College; and he was a member of The Massachusetts Historical Society, The Colonial Society of Massachusetts, and a sometime Fellow of The Royal Society of Arts, London, England. Former acting director of the W.E.B. Du Bois Institute for Afro-American Research, Harvard University, he was also the past president of The Signet Society, Harvard's oldest literary society; and former trustee of Wellesley College, of The Public Broadcasting Service, and of Plimoth Plantation. He was, in addition, a past president and trustee of The Pilgrim Society of Plymouth, Massachusetts. 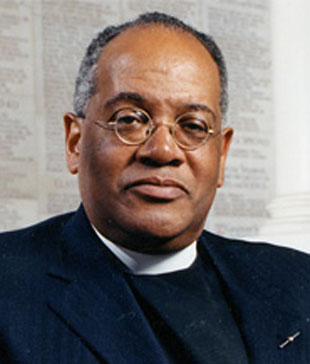