Eboo Patel works with governments, social sector organizations, and college and university campuses to help make interfaith cooperation a social norm. Named by U.S. News & World Report as one of America’s Best Leaders of 2009, he served on President Obama’s Inaugural Faith Council. He writes books and articles on religious diversity and is in demand as a keynote speaker at colleges and universities, philanthropic convenings, and civic gatherings.

In 1999, Patel founded Interfaith Youth Core on the idea that religion should be a bridge of cooperation rather than a barrier of division. The nonprofit emphasizes intercultural encounter, social action, and interfaith reflection.

Patel holds a doctorate in the sociology of religion from Oxford University, where he studied on a Rhodes scholarship. He has been awarded the Louisville Grawemeyer Prize in Religion, the Guru Nanak Interfaith Prize, the El Hibri Peace Education Prize, the Council of Independent Colleges Academic Leadership Award, along with honorary degrees from 15 colleges.

Patel lives in Chicago with his wife, Shehnaz, and their two sons. 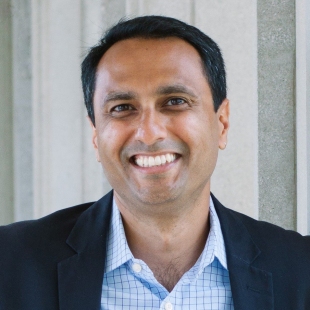