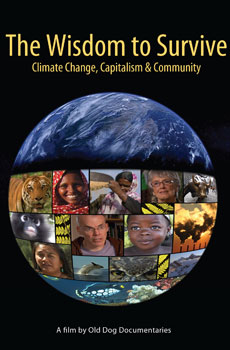 The Wisdom to Survive: Climate Change, Capitalism & Community is by far the best and most inspiring, enlightening, and practical overview of the spiritual dimensions of climate change that we have seen. With rare clarity and depth of insight, it reveals the challenges and the new possibilities that this ever-expanding tragedy offers us. Biologists Amy Seidl, Roger Payne, and Stephanie Kaza, among others, mix dire forecasts about what is happening with observations on how with imagination and creativity a new story is emerging, one which emphasizes the interdependence of life on Earth. Segments on alternative fuel options, permaculture, and city gardens demonstrate the commitment of the younger generations to change. Buddhist teacher Joanna Macy and Christian writer Bill McKibben offer words which encourage us to step up and take action for the sake of the planet and our neighbors. 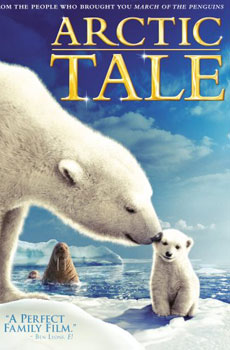 Arctic Tale is an extraordinary documentary that focuses on two animals in this frigid wilderness — a polar bear named Nanu and a walrus named Seela. Filmmakers, Adam Ravetch and Sarah Richardson, have a deep respect for these animals and their struggle to survive in an environment that is undergoing tremendous changes. Nanu and Seela, it soon becomes apparent are going to have to develop new resiliency to stay alive in this kingdom where the ice floes are disappearing. 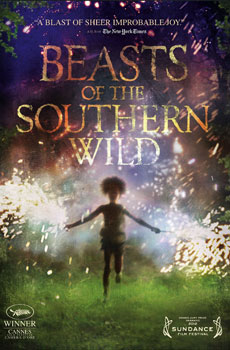 Beasts of the Southern Wild is one of our favorite films about the spiritual gift of fearlessness. Six-year-old Hushpuppy and her father live in poverty in a lowland separated from the Louisiana bayoo by a levee. When a severe hurricane comes (stirred up by global warming), they are battered by the flooding and all the problems that come with it. With the stout-hearted courage of a warrior, Hushpuppy takes up the challenge of repairing her smashed-up world. She says: "I see that I'm a little piece of a big universe, and that makes things right." 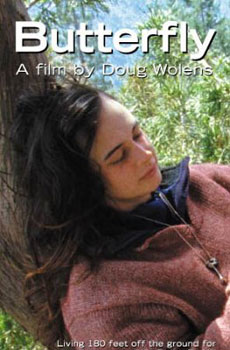 Butterfly is a bold and visionary film about Julia Butterfly Hill who climbed to a perch up in a 1,000-year-old redwood tree and began a two-year campaign to prevent her host from being cut down. Watching this inspiring film again is an initiation rite into a spiritual relationship with the Earth. At one point she recalls clinging to the branches during a terrible storm. She learns from the tree that the best way to handle stiff winds is to relax into them. These lessons serve her well in her work as an environmental activist. 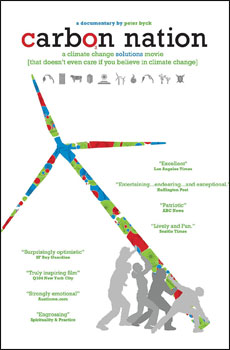 Carbon Nation is a documentary by Peter Byck aimed at all those who do not care about or are antagonistic toward global warming facts. For these skeptics, there are specific ways to change how we live: solar panels, leasing land to wind companies, and experiments with game-changing technology which can wean us from dependence on oil. Visit the official site to learn how you can take action. 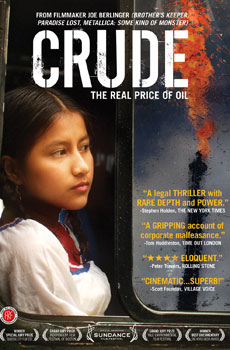 Crude is a documentary directed by Joe Berlinger (Brother's Keeper) about the legal case of Aginda vs Chevron-Texaco. The plaintiffs are 30,000 individuals, including members of five indigenous tribes and colonial settlers in Ecuador, who allege that over the course of its quest for oil, Texaco has dumped toxic waste into streams, river, and jungle floor of the Amazon rainforest, spilled billions of gallons of oil, burned natural gas into the atmosphere, and built unlined waste pits. Berlinger broadens the documentary out beyond what has been called the "Amazon Chernobyl case" to include material on global politics, environmental activism, human rights advocacy, and the unconscionable treatment of rapidly-disappearing indigenous cultures. 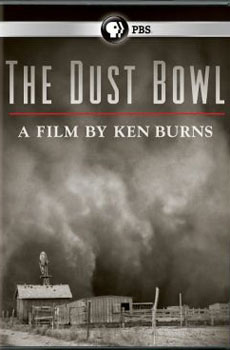 The Dust Bowl according to filmmaker Ken Burns is "the greatest man-made ecological disaster in American history." This documentary charts the environmental catastrophe which was brought on by the destruction of millions of acres of native grasslands to make room for wheat fields across the American Plains. This is a cautionary tale that has great relevance to contemporary society where the same pursuit of progress and profit is fueling extreme climate change and an unprecedented series of environmental disasters. 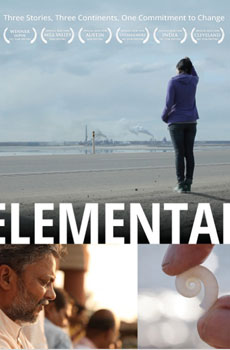 Elemental is a salutary and deeply spiritual documentary directed by Gayatri Roshan and Emmanuel Vaughan-Lee which presents profiles of three dedicated environmental activists on three continents. They are calling us to a new way of understanding our role in nature. Through their personal stories, the film reveals the immense challenges faced by those who want to change attitudes and spur citizens to band together in a communal effort before it is too late. 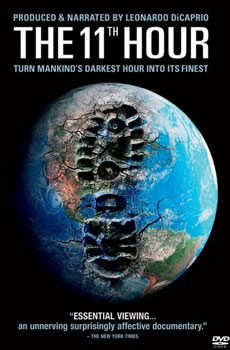 The 11th Hour The 11th Hour offers an incisive and cutting-edge examination of the global environmental crisis with material on climate change, species extinction, soil degradation, loss of forests, pollution of oceans. and more. There are interviews with 50 leading scientists and a spiritual message proclaiming the evolutionary importance of love, compassion, mindfulness, reverence, and connectedness with all living beings. (Q&A with Co-directors Leila Conners Petersen and Nadia Petersen.) 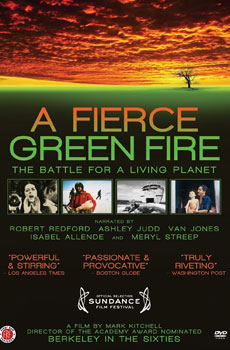 A Fierce Green Fire is a cogent and prophetic documentary that charts the incredible history of the environmental movement over the past 50 years, conveying the love and passion of many heroic individuals and groups. It begins with John Muir and the conservation efforts of the Sierra Club and ends with the uphill struggle of activist and nations to respond to the dangers of climate change. 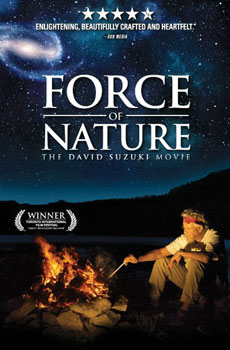 Force of Nature: The David Suzuki Movie is structured around a Legacy Lecture delivered by this Canadian scientist, educator, television personality, and author of more than 50 books. He comes across as an engaging, informed, and passionate eco-activist who through his long and impressive career has added to the fund of scientific knowledge used by those trying to make a case for dealing immediately with climate change. From the Heart of the World: The Elder Brothers' Warning centers around the descendants of a pre-Columbian civilization who asked the BBC Filmmaker Alan Ereira to visit them in their homeland so they could give a prophetic message to humankind. Seeing themselves as guardians of life on earth, the Kogi have a spiritual understanding of the bond between human beings and the natural world. This mesmerizing film is a moving plea for the ecological wisdom that will be needed to cope with climate change. (Also see our review of the directors book The Elder Brothers about his encounter with the Kogi tribe.) 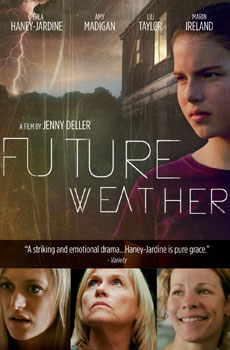 Future Weather is a feature film that centers around the challenges of a 13-year-old girl who is deeply concerned about the dire straits of the planet and passionate about doing something about it. We hear and read a lot about youth who are angry and frightened about the ecological disasters that loom on the horizon and threaten their health and well-being. But very few films has dramatizes this crisis before this well done coming-of-age drama written and directed by Jenny Deller. 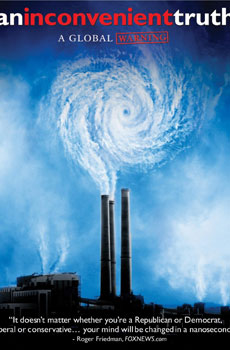 An Inconvenient Truth is the well-done documentary which has become known as Al Gore's "traveling global warming show." He challenges us to stop global warming in the wake of floods, droughts, epidemics, killer heat waves, and terrible storms. As a solution, he envisions a "Century of Renewal" with a combined emphasis on energy conservation, carbon capture technology, transportation, alternative energy sources, and engineering for efficiency. Night Moves is a feature film based on a true story about three environmental activists who decide to blow up a local hydroelectric dam in Oregon. Their righteous indignation is very understandable given the destruction and desolation of the Earth by corporations. But there is a shadow side to their activism. Given their passion and anger, it is only a matter of time before they, like those they oppose, begin to believe that collateral damage is just something that comes with the territory. This story charts the dark places in the hearts of idealists who become zealots. 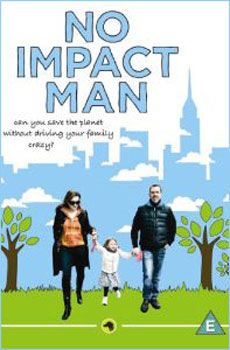 No Impact Man is an astonishing documentary about a radical idealist living in New York City with his wife and young daughter who is willing to put his ecological commitments to a test. He starts out with serious intentions, goes through some very funny unintended developments, and ends up with some surprising results for his whole family of their year-long project. This movie will change the way you look at the comforts and conveniences of everyday life. And it may even inspire you to take similar steps to help mend the Earth. 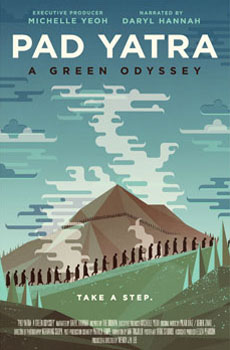 Pad Yatra: A Green Odyssey is a documentary by Wendy J. N. Lee, which centers on an ecosystem known as the "3rd pole" of the earth, a glacial region of the Himalayas that has been destabilized by dramatic changes of weather brought on by global warming. A Tibetan Buddhist teacher, H.H. the Gyalwang Drukpa, a recipient of a United Nations MDG honor, decides to lead a caravan of 700 pilgrims on a 450-mile walk to spread the message of environmental compassion. This was not an easy trek. The pilgrims crossed some of the most treacherous terrain on the planet at altitudes above 17,000 ft. One of the most exciting dimensions of this journey is its focus on environmental education. (Currently not available.) 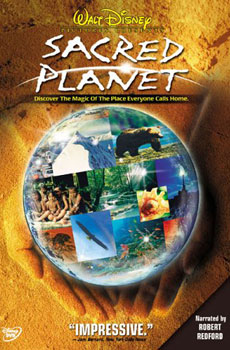 Sacred Planet presents indigenous people from all over the world sharing the wisdom that has been passed down through the generations in their communities. This may be the first time many viewers have ever heard indigenous peoples speak of what they feel about the sacred planet that all of us inhabit. They pay tribute to Mother Earth and state how she must be treated reverently. They point out the connections that human beings have with all creatures on the land, in the sea, and in the air. They talk about the spiritual value of never taking more than one needs. They listen attentively and learn important things from the land or the forest. These values and visions are those which speak to the ways all the world's people must address climate change. 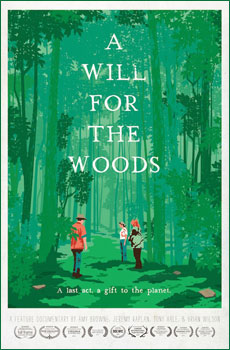 A Will for the Woods looks at a simple and elegant natural alternative to resource-intensive contemporary burial or cremation. The deceased is buried using only biodegradable materials and without a vault or toxic embalming in a woodland or other natural setting. Some of the elements of green burials are already used around the world in traditional Muslim and Jewish funerals, and it is the way used for centuries by indigenous cultures. It greatly reduces resource use and pollution and is less expensive than a conventional funeral. In some places, the practice is also a conservation tool as natural areas used for the burials are saved from development and may be restored to their natural beauty. 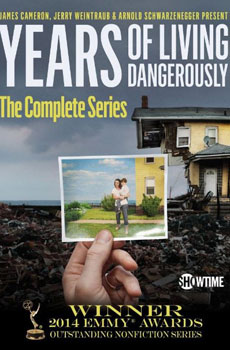 Years of Living Dangerously: The Complete Series is a nine-episode Emmy Award-winning documentary series on the multifaceted consequences of climate change. Assessments by a strong circle of scientific experts are laid alongside the stories of real people who are suffering the consequences of this catastrophe all over the world. The correspondents for each program are socially active actors and celebrities. Subjects covered include deforestation, drought, fires, carbon emissions, extreme weather, ocean acidification, alternative fuels, and the effect of climate change on economics, food shortages, poverty, migrations, health care, and foreign policy.