The Quest for Relationship in Her

What the film Her tells us about the gifts and challenges in our relationships with technology.

Early in the film Her, Theodore (Joaquin Phoenix) listens to an advertisement for a new computer operating system. The announcer poses some questions:

These are universal, perennial spiritual questions. And in this day when technology plays such a huge role in our everyday lives, it's not surprising that Theodore turns to a computer as he tries to answer them. Actually, he converses about the big issues of life with an "artificially intelligent operating system" who calls herself Samantha. Theodore discovers that, as promised, this OS "listens to you, understands you, and knows you."

This concept is not so far-fetched. Researchers have discovered that computers are already better than humans at math, logic, chess, and many games. Within a decade we will see robots performing many services as caregivers and household servants. As well as answering our phones and scheduling our appointments, these helpers may manage our auto-drive cars and make choices for us on our entertainment systems.

But Her goes beyond the idea of an artificial intelligence as something that performs tasks to something with which we have a relationship. This, too, is already happening. Many people all over the world view their computers as their best friends. This technology expands their world, introduces them to new information and experiences, gives them an opportunity to connect with others via social media, and even "listens" to their attempts at self-expression.

Some young people find it easier to talk to their computers than to their peers. A device even keeps secrets like a good friend would. Using anonymous screen names, you can try on different personas and get feedback from other folk that you would never get face-to-face. In social forums, interactions with strangers often bear the marks of friendships, from recognition of shared interests to checking up on each other when absent for a while.

More questions about our relationships with technology emerge as this story goes on. In several crowd scenes, we see people talking to or otherwise engaged with their OSes completely oblivious to those they are walking by. We see this all the time on the streets of New York. When Theodore goes to visit his best friend Amy, he rests in the room while she carries on a conversation with her OS. How many times have you watched two people sitting together, both texting to others on their phones?

What's happening is that people are giving priority to a disembodied voice (a text, a phone call) over the physical body right next to them. In Her, Theodore takes Samantha to a picnic with a friend from work and his human girlfriend. They include Samantha in their conversation as if an OS has equal standing with them.

Perhaps the biggest sign that Theodore and Samantha have a real relationship is that it changes over time. In the beginning, she explains that she has "the ability to grow through my experiences so in every moment, I'm evolving just like you." This turns out to be a problem as she evolves way faster than he does. We learn through flashbacks that he has had problems with change before. His relationship to his ex-wife disintegrated when they did not change at the same rate.

Her turns into a profoundly spiritual literate film when it takes up issues of the heart. Theodore assumes that Samantha belongs to him; after all, she is a purchased OS. But this consciousness cannot be contained nor possessed, like the larger universe of which it is just one part.

"I'm yours," Samantha says, "but along the way I became many other things." With the classic dualistic argument, he protests: "You're mine or you're not mine." No, she speaks out of the unity of consciousness: "I'm yours and I'm not yours."

The joy and contentment Theodore seeks does not come with possession. It comes from showing up, not holding back his emotions, and being willing to live fully and freely. With two actions at the end of the film, he proves he understands what Samantha has taught him:

"The heart's not like a box that gets filled up. It expands in size the more you love." 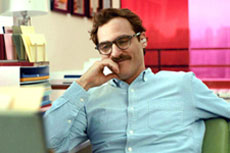