Directed by Jill Sprecher
A wonderfully idiosyncratic film about the working lives of women.

Iris (Toni Collette), a shy and quiet young woman, takes a temporary job at Global Credit Association. Arriving early, she waits for two hours until Barbara (Debra Jo Rupp) takes her to a desk and assigns her to type some forms. "Try not to make too many mistakes," she is told. "These forms are expensive." The diligent Iris makes a few errors and hides them in the waste basket in the women's room.

The insecure newcomer is given a tour of the place by Margaret (Parker Posey), a temp who has a lot of anger and directs it against her bosses and the permanent workers. At lunch, this feisty subversive introduces Iris to two other temps: Paula (Lisa Kudrow), an aspiring actress, and Jane (Alanna Uback), who's just marking time before her upcoming marriage to a young man she has been dating for a long time. After work, they go to a nearby bar where Paula tries to get the attention of various men. Margaret shows her disdain for a man who speaks to Paula and then ridicules her behind her back.

Iris, who is being pressured by her father (Paul Dooley) to take a regular job at a big company, slowly relaxes into her work and feels like she fits in with Margaret, Paula, and Jane. However, they are all miffed when Cleo (Helen Fitzgerald), an outsider, gets a full-time job as an assistant. Not too long after she arrives, the tranquility of the office is upset when it's discovered that someone is stealing things, including personal items of other workers. A staff meeting is called and the head of the company expresses disappointment with the thievery, saying that he thought that everyone working there felt like they were part of a family. Margaret nearly chokes on that sentiment since she feels invisible and wonders whether anyone would even notice if she didn't show up. She and her friends just want to express themselves in an authentic way, to overcome their self-doubts and fear of failure, and to be treated fairly and with respect.

Director Jill Sprecher, who cowrote the screenplay with her sister Karen, has made a wonderfully idiosyncratic film about the working lives of women. This subject is hardly ever dealt with seriously in movies. Iris, who writes down many of her thoughts in a notebook, begins to blossom due to her relationship with the three other temps. She opens up emotionally. But things change when the thievery begins and her friendship with Margaret unravels. Early in the drama, she sees a fortune teller who tells her, "You tiptoe through life. Don’t be afraid to make your mark." The magical moments which lead to Iris's personal transformation are subtle and sneaky. They take her and us by surprise. Clockwatchers speaks to many issues that we all face on the job and in our work-a-day worlds. 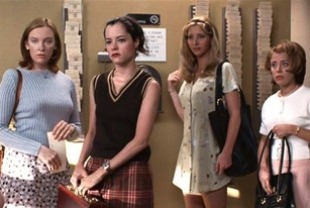