Babe: Pig in the City

Directed by George Miller
The delightful sequel where Babe again comes across as a great moral exemplar of kindness.

Following his triumph as national sheepdog champion, Babe the pig returns home and inadvertently involves Farmer Hoggett in an accident that confines him to bed and rest. With bankers threatening to foreclose on the farm, Mrs. Hoggett decides to accept an invitation for Babe to be a headliner at a huge state fair. But due to trouble at the airport, the farmer's wife and the little pig miss their connecting flight. They are stranded in a big city. With several days to spare before they can return home, they take up residence at an abandoned hotel that a strange woman uses to shelter homeless animals. They include a family of chimps, a monkey who immediately lifts Mrs. Hoggett's bag, and a reserved orangutan. A chorus of cats and an assortment of mixed breed dogs round out the community.

When Babe and Mrs. Hoggett are separated, he takes his mission to save the farm to the streets of the city. There he meets up with some major new challenges in the form of animals the likes of which he's never seen before — including a pit bull and a pink poodle — not to mention the authorities who want to impound all the animals. The city takes a lot out of our hero but he has the moral support of the three singing mice and Ferdinand the Duck, who has managed to follow him with a lift from a pelican.

George Miller's Babe: Pig in the City is a delightfully funny follow-up to the phenomenally successful original movie about the pig who learned to herd sheep by practicing courtesy and empathy. With its large cast of characters, it will appeal to animal lovers. Babe again comes across a great moral exemplar of kindness. He always sees the good in others. He is generous and self-sacrificing. You just gotta love him. 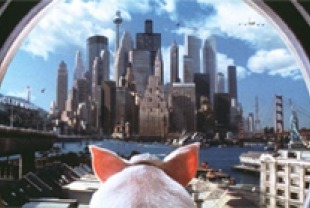