Directed by Robert Altman
A fine and funny movie that also gives us a keen sense of the impermanence of all creative endeavors and the fleeting nature of reality.

Garrison Keillor is the laid-back host and creator of A Prairie Home Companion, a radio show that has been broadcasting its unique blend of comedy, music, and storytelling for 31 years. It is a veritable cultural institution in the Midwest where the winters are long and cold and the emotions are kept in check. Keillor's fans ought to flock to this movie directed by Robert Altman, master of the free-form character-based film (Nashville, The Player, Kansas City, The Company) that is true to the wild and weird things that happen to people in the regular course of their work days.

The screenplay by Keillor and Ken LaZebnik revolves around the last live broadcast of a popular Midwestern radio show. Its home, the Fitzgerald Theatre in St. Paul, Minnesota, has been bought by a Texas corporation that plans to demolish it and put up a parking lot. While most of the show's performers are outraged or sad about the end of an era, the host, Garrison Keillor, prefers not to get bent out of shape: "Every show is your last show. That's my philosophy."

The most prominent performers are Yolanda and Rhonda Johnson (Meryl Streep and Lily Tomlin), two survivors of a quartet of sisters. They reminisce about the past a lot, mostly the good times, although Yolanda still bristles about her romantic breakup with Keillor. Her teenage daughter Lola (Lindsay Lohan) has very little interest in her mother's ability to see some good in all that has come her way; she writes suicide poetry, preferring to look on the dark side of things.

Keillor glides through the program, introducing the acts, joining in with some of them, and giving special attention to the commercials, which often sound like spoofs. His off-stage obsession with telling lengthy anecdotes causes a lot of tension in Molly (Maya Rudolph), his pregnant assistant stage manager. Two cowboy singers, Dusty (Woody Harrelson) and Lefty (John C. Reilly) provide some humorous moments with their banter and a final number titled "Bad Jokes." An elderly country singer (L.Q. Jones) flirts with women and acts half his age.

A private detective, amusingly named Guy Noir (Kevin Kline), wanders around backstage to provide security for the show. He's also in charge of meeting the corporate executive (Tommy Lee Jones) who shows up for the last broadcast. Guy Noir is thrown off balance (literally) by a mysterious and beautiful blonde (Virginia Madsen) in a white trench coat. It turns out she is an angel of death similar to the role played by Jessica Lange in Bob Fosse's film All That Jazz. One of the performers is going to die, and she is there to usher that person into the next world.

A Prairie Home Companion is a witty and wonderful meditation on one of the great mysteries of life — the impermanence of all things. As the minutes tick away toward the show's final moments, we sense the fragility of life and gain a fresh appreciation for the worth of things. The movie celebrates creativity as a source of meaning, and storytelling as one of the best ways to create community both near and far. And there is the music — country, gospel, and pop music to soothe and excite our souls. ("Goodbye to My Mama" as performed by Streep and Tomlin is worth the price of admission.)

Whatever we experience, it will change. Nothing stays the same or lasts forever. Everything is fleeting. That's the way of the world. This melancholy film touches our hearts with its spiritual message that we must savor the present moment and then let it go. Leaving the theatre we feel grateful for the chance to spend some quality time with performers who truly enjoy entertaining us. We have been together and now it is over — except for the memories and a lingering sweetness which we can replay in our minds again and again. And that's enough.

Special DVD features include a commentary by director Robert Altman and actor Kevin Kline; a featurette "Come Play With Us: A Feature Companion";"Onstage at the Fitzgerald: A Music Companion" — extended musical performances and advertising segments; and a soundtrack preview (jump to songs in the film). 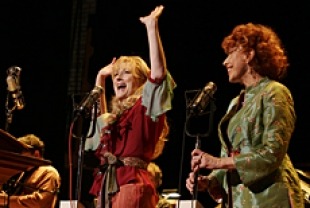 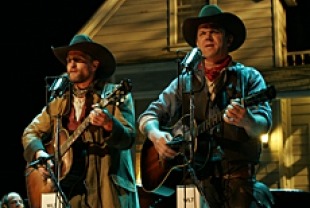 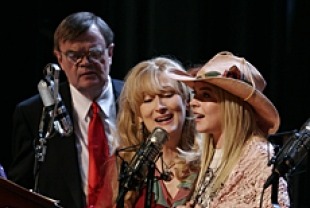