Directed by Glenn Holsten
An extraordinary documentary about Father Mychal Judge who followed his natural caring impulse into a life of compassionate service of others.

"Helping out is not some special skill. It is not the domain of rare individuals. It is not confined to a single part or time of our lives. We simply heed the call of that natural caring impulse within, and follow where it leads us," Ram Dass wrote in his classic How Can I Help?. These bold and stirring words perfectly describe the life and ministry of Father Mychal Judge, Chaplain of the Fire Department of New York, who responded to the call to duty on 9/11 and died a victim of the attack on the World Trade Center. The image of five men carrying his dead body out of the smoking rubble has become iconic of that day, reminding us of those who selflessly gave their lives for others. Some have even called the photograph an American Pieta.

This inspiring, heart-affecting, and riveting documentary, directed by Glenn Holsten, does a fine job covering the many different facets of Father Judge's life and ministry. Photographs, films of him at work, and interviews with friends, clerical colleagues, and celebrities are woven together by Ian McKellen's top-drawer narration. We watch this priest's spiritual adventure unfold from his humble beginnings in Brooklyn to his dramatic death in the city he served so well.

Judge was born in Brooklyn in 1933, the son of Irish immigrants. When he was six, his father died of an illness, a loss that haunted him all his life. He entered seminary when he was 15 years old and was ordained a priest in the Franciscan order in 1961. Those who remember him talk about his wild laugh, his charisma, his jaunty handsomeness, and his eagerness to make a difference in the world through service. He stayed within the Catholic tradition but definitely marched to the beat of his own drum.

Father Judge loved to walk, and one of his favorite pastimes was to cross the Brooklyn Bridge on foot and use the time to think up new ideas and projects. But it was the energy of Manhattan that thrilled him. He used to go to the N.Y. Public Library on Fifth Avenue and meditate on the two lion statues in front of the building which symbolize patience and fortitude. These two virtues did not come easy to this volatile priest.

Father Judge served several parishes and held other positions before being appointed Chaplain of the Fire Department in 1992. He baptized the firefighters' children, performed marriage ceremonies, and officiated at funerals and memorials. He was immensely popular with these brave comrades doing an always dangerous job, sharing with them a deep and abiding joy in his work.

Many of the firefighters did not know that Father Judge was a recovering alcoholic for 23 years. This challenge enabled him to empathize with addicts, derelicts, the homeless, and other cast-offs in New York City. As a priest he helped many wayward souls turn their lives around because of his care and compassion. His ministry was very important to the families of victims of the 1996 crash of TWA Flight 800. He spoke from the heart about grief, reliance upon God's love, and hope.

Father Judge was gay, and he was one of the first to open his heart to the isolated and abandoned victims of AIDS in the city. When he entered the rooms of these dying young men, many of them turned away once they realized he was a priest. The Catholic Church was seen as an enemy rather than an ally. Father Judge changed all that by massaging their feet with holy oil and talking to them with sensitivity and genuine love. There are also scenes of his peace mission to Ireland and his pilgrimage to Lourdes in France.

One of Father Judge's favorite prayers was this one:

A remarkable achievement of Saint of 9/11 is showing us just how Father Judge lived that prayer. He opened himself to Divine grace and simply followed his heart and soul when new challenges appeared. He was a great believer in living in the present moment and not trying to psyche out what God is going to do. Living with not-knowing takes courage in a culture where zealots have answers for everything and show no mercy for those they see as enemies or wayward souls. Keeping out of God's way enabled Father Judge to give in to his natural instinct for caring and be compassionate to all. 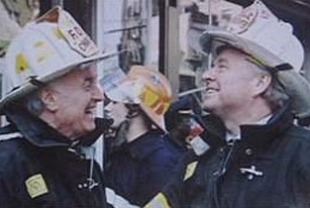 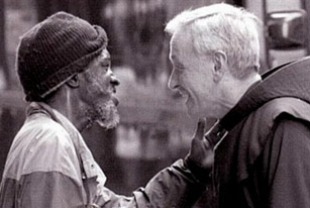 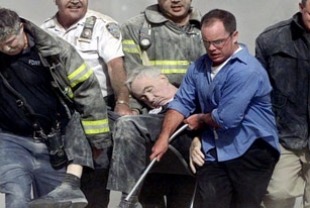