Directed by Stephen Frears
An audacious cinematic triumph that humanizes Queen Elizabeth in a time of crisis and change.

English director Stephen Frears can always be depended upon to deliver us emotionally into a complicated situation where peoples' values are put on the line. He did it in Liam, a drama about the struggles of a working-class family in Liverpool. Then in Dirty Pretty Things, he took us into the whirligig of illegal immigrants trying to survive in London. His last picture, Mrs. Henderson Presents focused on an upper-class widow who finds a new lease on life by starting a theatre. In these entertaining and well-acted movies, this English cinematic wizard tutors us in the art of empathy as he crosses from class to class and uncovers the flaws and foibles of human beings trying to cope with change.

The Queen is an audacious cinematic triumph that demonstrates that Frears is at the apex of his creative powers. With a clever, nuanced, and totally satisfying screenplay by Peter Morgan (The Last King of Scotland), this drama takes us behind-the-scenes and depicts the remarkable events set in motion by the death of Princess Diana in a car crash on August 31, 1997. The two central characters are Queen Elizabeth (Helen Mirren), who believes in tradition and duty, and the newly elected Labour Prime Minister Tony Blair (Michael Sheen), a spunky believer in modernization. Frears and Morgan mix their own story with archival footage of Diana and TV coverage of the events after her death through her funeral. A major motif in the movie is the power of the press to set in motion events and complications so diffuse and unpredictable that not even political masters of spin cannot decipher their multiple meanings.

Fresh from his landslide victory in May 1997, Tony Blair and his wife Cherie (Helen McCrory) pay an obligatory visit to the Queen. The meeting reveals his uneasiness in her presence and her disdain of young idealists. Elizabeth has seen ten prime ministers come and go since Winston Churchill. She remains in control of the meeting, and Blair comes away with respect for her long history. Blair's wife, who is anti-monarchy. feels the whole thing about bowing and groveling in the Queen's presence is a rather disagreeable charade.

When Queen Elizabeth hears about Diana's death months later, the Royal Family is away at their Scottish retreat at Balmoral. She makes the decision not to give any public comments since this is what tradition and duty require. But the public response to Diana's death sweeps the nation into a gigantic orgy of grief. Alastair Campbell (Mark Bazeley) scores big with a speech he writes for Blair where the new Prime Minister salutes Diana as the People's Princess. Prince Charles (Alex Jennings) is upset by the Royal Family's chilly lack of response to his ex-wife's death and feels that they should modernize and get in step with the times. Prince Philip (James Cromwell) is fed up with the media's continuing criticism of the monarchy and its adulation of Diana. The Queen Mother (Sylvia Syms) is astonished by the thought that the Royal Family should have to respond in any way to what the public demands. She can't conceive of royalty from the past caving into to popular opinion. The one person in this upper-crust set who has to walk on eggshells is Sir Robin Janvrin (Roger Allam), the Queen's deputy private secetary.

One of the many remarkable surprises in this drama set in the corridors of power is how Elizabeth and Blair are changed into different people by the choices they make in the course of a tumultuous week. The Queen lives in isolation, and it is her confrontation with a stag while she is out alone in the woods that proves to be a turning point in her response to Diana's death. We won't spoil the scene but are compelled to mention that the stag is an age-old symbol of the imperial and its fourteen points means that it has eluded capture for a long time.

Helen Mirren gives an Academy Award caliber performance as the Queen who takes a long and humiliating journey to get in touch with her heart, if only for a brief shining moment. She humanizes this English figurehead in many scenes but most forcefully when reading cards critical of her just before her televised broadcast to the nation.

And although Blair succeeds in animating the Queen to show some flexibility, he finds himself defending her from the simplistic and cynical barbs of his wife and his spinmeister. In one devastating line, Elizabeth tells Blair that in the future he might find himself on the end of a vicious media attack: "One day, quite suddenly without warning, the same thing will happen to you."

Special DVD features include a commentary by director Stephen Frears and writer Peter Morgan; commentary by British historian and royal expert Robert Lacey, author of Majesty; and the making of The Queen. 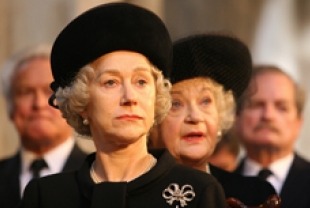 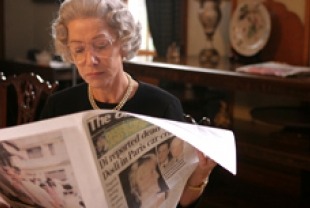