Directed by Jafar Panahi
A funny, poignant, and jubilant Iranian film about some passionate female soccer fans that ends with a mystical moment of oneness.

A middle-aged man riding in a cab is distraught; his teenage daughter has left home without his permission to go to Tehran's Azadi stadium where Iran is playing Bahrain to qualify for the 2006 World Cup. This young female soccer fan is not alone in her love of the game and willingness to do anything to see it. In a bus filled with boys and men, a pretty girl has disguised herself as a male, her hat pulled down and the national colors painted on her face. At the busy stadium, she manages to purchase a bootleg ticket but her inexperience lands her in the hands of police at the gate. After using her cell phone, a young soldier takes her to a holding pen inside the stadium but away from the soccer action.

Five other girls in various disguises are being held there. One is a streetwise woman with feminist leanings. Another has played soccer on a women's team. A woman dressed in a military uniform shows up with handcuffs. These women share a passion for the game but are not allowed to see it for such flimsy reasons as it not being proper for them to see men in shorts on the field or to hear their fathers, husbands, and brothers cursing in the stands. The mostly rural soldiers yell at their prisoners and are not happy with their assignment. They would much rather be at home relaxing or looking after their sheep. One solider finally agrees to provide commentary on the game as he sees it through a hole in the wall.

In one of the most humorous scenes in the film, one of the girls has to go to the bathroom. But since there are no facilities for women, the soldier must guard her while she goes in the men's lavatory. He insists that she wear a soccer poster over her face so that she cannot read the graffiti on the walls. Thrilled to have a chance to see a bit of the game, she escapes for a while but dutifully returns to the holding pen. Before the game is over a minibus arrives to take them to the vice squad. They are joined by a teenage boy who loves to explode firecrackers. In order to better hear the game, the soldier in authority holds the radio out the bus window where the reception is better.

Iranian writer and director Jafar Panahi is one of the most humanistic filmmakers anywhere in the world. All of his movies are gems that reveal the qualities that draw us all together despite surface differences as members of the human family. Here he uses the game of soccer as a means to explore how the human rights of women in Iran are violated. But he doesn't stop with cultural criticism. He also explores how the sport unites people. In the closing scenes of this extraordinary movie, the impatient and worn-out policemen, the angry and exhausted girls, and the adolescent boy suddenly become one with each other and with all the fans in the streets. Panahi is not just presenting the response to Iran's victory in a game; he is showing us the joy that can bring those in conflict together for a mystical moment of celebration. Such moments give us hope that this weary and war-torn world can one day become one. 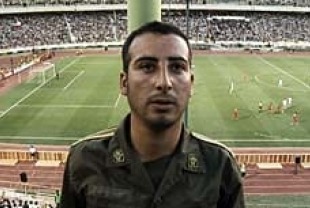 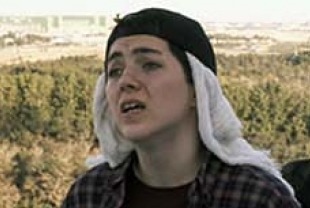 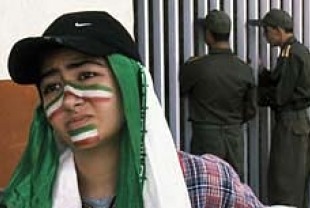