So Goes the Nation

Here is a sturdy report from documentary filmmakers James D. Stern and Adam Del Deo on the 2004 presidential election as it came down to the wire in the state of Ohio. In an effort to give a balanced perspective, they present the campaign strategies of both parties. For the Democrats: Terry McAuliffe (Chairman of the Democratic National Committee), Mary Beth Cahill (John Kerry's 2004 Campaign Manager), Tad Devine (Kerry's chief campaign strategist), and Paul Begala (a senior Democratic advisor). For the Republicans: Edward Gillespie (Chairman of the Republican National Committee), Ken Mehlman (George W. Bush's 2004 campaign manager), Matthew Dowd (Bush's chief campaign strategist), and Mark McKinnon (Bush's media strategist). Of course, the winners are very confident in victory and the losers lament bad decisions made along the way. So Goes the Nation also includes extensive commentaries by three volunteers who provide insights into the fierce struggle to win in Ohio.

This documentary provides a razor-sharp picture of the voting process and the feelings, passions, ideas, and ideals that animated people to vote in the presidential election. There is coverage of the Democratic and Republican conventions, the Swiftboat controversy, the effective media campaign against Kerry's flip-flop propensity, the on message view of President Bush as a strong leader with strong convictions, and the Republican ability to tap into the huge groundswell of cultural populism against gay marriages and Kerry's so-called elitism. Both Republican and Democratic experts agree on how well the incumbent marshaled the 9/11 sentiment into a mandate for security in the face of terrorism.

The final segments cover what the Democrats feared was irregularity at the polls, but later admit turned out to be a lack of voting machines at districts with large black populations. Bush won the election by making the most of the rural and Bible Belt believers while the Democrats made a bad decision to put all their energy into winning the allegiance of swing voters. This report does not paint a pretty picture of democracy; instead it gives a glimpse of power politics in America animated by media, bigotry, and nasty negative campaigning. 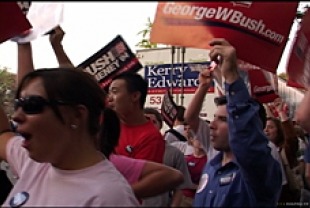 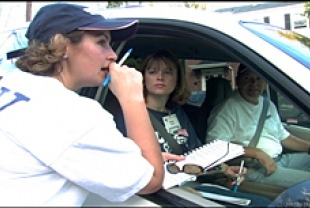 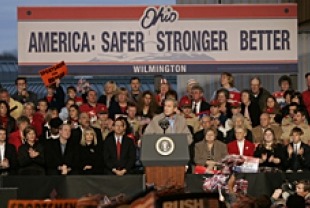